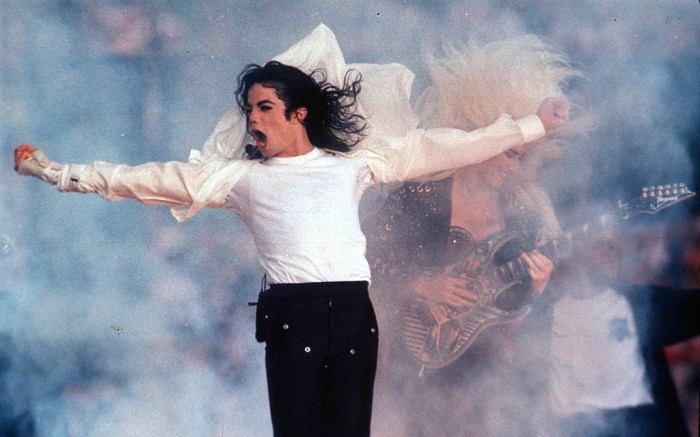 It’s time to bust out the snacks, jerseys, and sports-related anxiety. Yes, the Super Bowl is just around the corner. But even if you don’t care about football, there’s one thing that we can all get behind during the championship game — and it’s not the cheesy commercials. We’re talking about the always stellar Super Bowl halftime performance.

Super Bowl LVI, which takes place on Sunday, Feb. 13, will see the Los Angeles Rams and Cincinnati Bengals face off on the field. It will also feature a star-studded halftime performance by Dr. Dre, Snoop Dogg, Eminem, Mary J. Blige, and Kendrick Lamar. Notably, the Super Bowl halftime tradition is older than all of this year’s performers, excluding 56-year-old Dr. Dre, who was just shy of 2 years old during the first Super Bowl and its accompanying halftime show. Needless to say, the Super Bowl’s entertainment staple has a rich history and humble beginnings that would surprise any viewer of the pyrotechnic-heavy Super Bowl halftime shows of recent years.

In preparation for Super Bowl Sunday, read up on the strange history and expensive world of Super Bowl halftime shows. You’ll impress your friends with the weird history and facts between touchdowns and chicken wings.

The first Super Bowl took place on Jan. 15, 1967 in Los Angeles. It featured a 15-minute long halftime performance by The University of Arizona Symphonic Marching Band with appearances by the Grambling State University’s Marching Band, trumpeter Al Hirt, and the Anaheim High School drill team. Notably, Grambling State is a historically Black college, which Parade magazine points out was “significant for 1967 when racial tensions were high, especially in Los Angeles.” The performance also included two men flying around with jetpacks, teenagers dressed in colonial garb, and a release of pigeons and balloons.

It’s been said that Broadway star Carol Channing was the first true “celebrity performer” at the Super Bowl Halftime Show. She took the stage during the Mardi Gras-themed halftime show in 1970, which also featured the Southern University Marching Band, Al Hirt, and opera singer Marguerite Piazza.

Up until the 2000s, Super Bowl halftime show performances were crafted around a theme. At best, the themes united the performance, serving as inspiration for a cohesive set. At worst, it turned the performance into a campy fantasia. This is perhaps best exemplified by 1977’s “It’s a Small World” theme, which served as a giant Disney ad, and 1988’s “Something Grand” theme, which included 88 grand pianos, the Rockettes, Chubby Checker, a sea of “dancercizers” and cheerleaders, and not one but two college marching bands. All. Performing. At. Once. Then there’s also the 1989 “Be Bop Bamboozled” show, which featured an Elvis impersonator named Elvis Presto as the main performer and required viewers to wear 3D glasses at home, a show which largely considered a Super Bowl halftime disaster.

The Mid-Game Performance Gets Redefined

Marching bands were phased out in 1993 when Micheal Jackson performed a five-song set titled “Heal The World” that changed the trajectory of mid-game Super Bowl performances. Jackson made the mid-game performance into a mini-concert instead of a band showcase, which is how it’s still treated today. At the time, some called Jackson’s performance “self-indulgent,” as the King of Pop famously stood in silence for almost two minutes as anticipation grew. But since that defining performance, top-tier celebrity talent has been the go-to for the NFL, with the Super Bowl halftime shows featuring performances by the biggest names in the industry.

In another notable change, the NFL dropped the previously-mentioned theme requirement in 2002 to allow for U2’s tribute to 9/11 victims and survivors. Since then, performers have had a touch more control over the performance, which has produced some massive cultural moments. There’s the infamous Janet Jackson and Justin Timberlake halftime performance in 2004; the Left Shark meme to come out of Katy Perry’s 2015 performance, and Prince’s 2007 performance of “Purple Rain” in a downpour. And that’s just to name a few.

Performing at the Super Bowl is often considered a pinnacle of an artist’s career, on par with playing Madison Square Garden or going platinum. But it isn’t for the paycheck. In fact, the paycheck is nothing at all. In fact, though the NFL supplies a Super Bowl halftime show production budget, insiders say the allotted money is almost never enough to foot the bill. Sometimes the artist’s label will step in and supply the rest of the cost — but sometimes the artists themselves actually pay to put on their dream show.

Though actual figures are kept under wraps, it’s estimated the average cost of a Super Bowl halftime show today is about $13 million dollars. That’s $1 million dollars per minute, given that the average performance clocks in at 13 minutes. But some artists reportedly come in way under the mark, like Beyonce’s 2013 performance, which cost an estimated $600,000 to produce.

Needless to say, the Super Bowl halftime show has certainly come a long way from college marching band showcases featuring powdered wigs, jet packs, and pigeons. Safe to say, you can expect a different kind of grandeur when you tune in to the show on Super Bowl Sunday, though Snoop Dogg in colonial dress would certainly be a cultural moment.