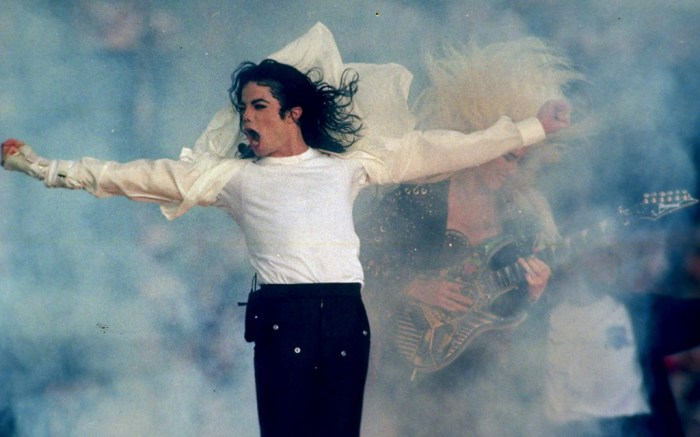 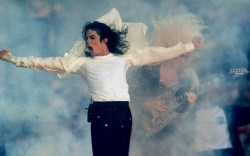 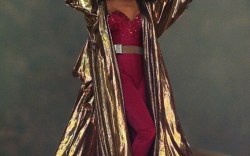 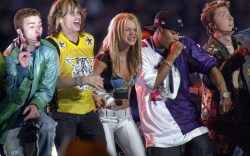 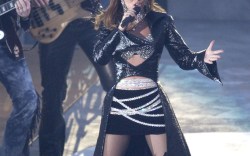 Whitney Houston — dressed in a casual white tracksuit and Nike sneakers — made casual style feel special when she performed the national anthem at the 1991 Super Bowl. Known for her powerhouse vocals, Houston made her voice the main focus by keeping the outfit simple.

A few years later, in 1996, Diana Ross went for a more glamorous look than Houston’s — living up to her diva reputation — in a red bodysuit and gold cape. The singer stood on a matching gold stage as she headlined the halftime show.

As the year’s have gone on, the production value of the Super Bowl performances has increased, leading to more elaborate costumes than the ones sported by Houston, Ross and Jackson, who performed in a flowing white shirt and black pants for an unfussy look.

Katy Perry took to the stage at the 2015 Super Bowl clad in a beach-ball inspired set. The playfully dressed singer was surrounded by backup dancers wearing polka-dotted bikinis — making for a colorful stage that lived up to Perry’s reputation for whimsy.

A year later, Beyoncé made a powerful statement with her style at Super Bowl 50. She paid homage to the late Jackson, sporting a military-inspired jacket with metallic detailing. But besides paying tribute to an artist, Beyoncé’s look also had political implications — her backup dancers wore berets inspired by the Black Panthers.

Super Bowl LI was played at NRG Stadium in Houston, Texas, on February 5, 2017. Singer, songwriter, and actress Lady Gaga performed at the coveted halftime show, donning a glittery bodysuit suspended from the ceiling. Gaga floated around the arena in a pair of gleaming knee-high boots.

Super Bowl LII brought about an intense show that had football fans on their feet. Justin Timberlake headlined the halftime show on February fourth, along with his band “The Tennessee Kids”. Timberlake also performed in two previous Super Bowl XXXV in 2001 as a member of NSYNC, and Super Bowl XXXVIII in 2004 with Janet Jackson. Timberlake wore a matching camo set with a button up underneath and an orange bandana wrapped round his neck. He wore grey Jordans on his feet.

Sunday, February 3 the Super Bowl began in 2019.  The New England Patriots defeated the National Football Conference (NFC) champion Los Angeles Rams, 13–3.  The game was played at the Mercedes-Benz Stadium in Atlanta, Georgia and was the first Super Bowl played at the stadium. The halftime show was headlined stylishly by Maroon 5. The lead singer of the band Adam Levine donned a colorful windbreaker and black jeans in a comfy cozy look that allowed him to perform to his heart’s content.

Super Bowl LIV was one for the books. Champion Kansas City Chiefs defeated the National Football Conference (NFC) champion San Francisco 49ers, 31–20. The star-studded halftime show was headlined by Latinx performers Jennifer Lopez and Shakira and was seen by an estimated 102 million viewers—a slight increase over Super Bowl LIII in 2019. The performers wore glittery body-con outfits that had them shining from all angles. Lopez wore a silver body suit with strappy silver sandals while Shakira wore gold with gold sneakers.

Super Bowl LV took place on Sunday, Feb. 7 amidst concerns of cancellation due to the COVID-19 pandemic. The game was played at Raymond James Stadium in Tampa, Florida, the home stadium of the Buccaneers, marking the first time a team played a Super Bowl in its home stadium. The Buccaneers defeated the Kansas City Chiefs, 31–9. The halftime show headline in 2021 was the Canadian singer The Weeknd. The performer sang and danced in a red sparkling blazer and black slacks. He completed the look with some black dress shoes.

It’s time to break out the face paint, chips, and foam fingers. The 2022 Super Bowl is approaching, but this season’s halftime show performance has already been revealed. The coveted event is set to take place as planned with precaution and COVID mitigation strategies in place. 5 Rap and R&B performers will grace one of the largest stages in the world in February. The performance for Super Bowl 56 is set to be star-studded featuring the ever-stylish Snoop Dogg, Dr. Dre, Mary J Blige, Eminem, and ever-popular Kendrick Lamar. Songwriter Blige is no first-timer, however, the singer having had performed famously at the Super Bowl in 2001 with immensely famous rock band Aerosmith and pop star Britney Spears. The highly anticipated Super Bowl LVI will air live on NBC and Peacock on Sunday, Feb. 13, 2022, at SoFi Stadium in Inglewood, Calif., home of the Rams and the Chargers.

Click through the gallery to see more looks from performers, including Janet Jackson, Lady Gaga and Jennifer Hudson.

The Most Stylish Football Players