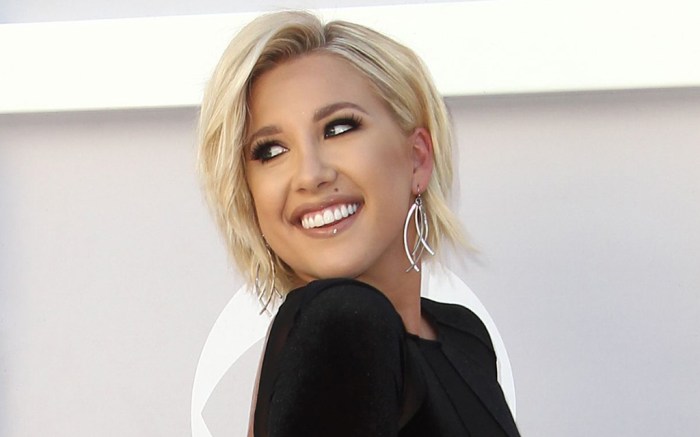 Savannah Chrisley’s life has been a starry one. From beauty pageant queen to reality TV star, the former Miss Tennessee Teen USA’s lifestyle transitions into her wardrobe.

Savannah was born into a multi-millionaire family as the daughter of Todd and Julie Chrisley. The family gained its own reality television show, “Chrisley Knows Best,” in 2014. Beyond her ongoing reality stint, Savannah is also known for her work on the “Sharknado” franchise, as well as her impeccable style.

While working up a sweat in Miami in May of 2022, Chrisley sported an athletic look comprised of a flowing white tennis skirt, Alo Yoga hat and purple cropped tank top. On her feet, the reality star laced up bright neon orange athletic sneakers from APL in “TechLoom Breeze” style, perfect for her workout.

In 2020, Chrisley stopped by the set of E! New’s “Daily Pop” wearing a red and black blazer set with shorts and a silky lace cami. The casual business style was worn with strappy black sandal heels.

Getting glamorous, Chrisley attended the 52nd Academy of Country Music Awards held in Las Vegas dressed in a floor-length mermaid-style dress. The garment featured see-through panels and geometric cutouts. Her heels were hidden.

Next, Chrisley tackled the 2014 Jingle Ball in Los Angeles clad in a grungy maxi dress with a flouncy high-low hem that reflected the popular fashions of the time. On her feet, the former pageant contestant slipped into black ankle boots feat triangular cutouts and peep-toe detailing.

In 2014, Chrisley attended the Television Critics Association Summer Press Tour in Beverly Hills, Calif., dressed in a summery floral mini dress with a cutout at the back. On her feet, the actress sported sky-high espadrille wedges that gave Chrisley a big boost.