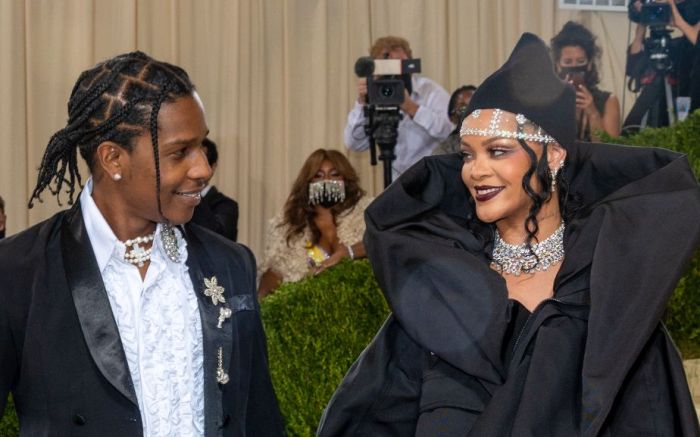 Rihanna and A$AP Rocky are two powerful fashion influencers, but together they bring it up to a level that makes them one of the most stylish celebrity couples. The dynamic duo originally sparked dating rumors in 2013, after Riri starred in Rocky’s, “Fashion Killa” music video. However, they continued to maintain a platonic, but flirtatious friendship in the public eye amidst a handful of various high-profile relationships that weathered between the two throughout the years.

Rihanna’s appearance in the fitting video was just the tip of the iceberg for the couple. The pair has continued to work on various projects together, including Rihanna’s Fenty Skin campaign.

Before their friendship blossomed into love, fans know that the Bad Gal has been romantically involved with Chris Brown, Drake and businessman and philanthropist Hassan Jameel before making it official with Pretty Flacko. A$AP Rocky has also had a fair share of relationships and was rumored to be dating Kendall Jenner, Rita Ora, Iggy Azalea and Chanel Iman.

In 2021, the rapper officially sparked dating rumors after he called Riri the “love of his life” during an interview, and since then they have been labeled as #RelationshipGoals.

The couple might have a fairytale love story, but it’s their style that drives everyone wild. They tend to give a masterclass in fashion anytime they step out. Rihanna’s knack for styling vintage gems with new season pieces matches Rocky’s eclectic style. The “Work” singer is known for being a sartorial risk taker, after all, only she can make a wine glass an accessory and make walking on grates look as if she’s walking on a runway.

Lord Flacko has also been labeled a fashion icon as he’s always effortlessly dripping with swag. The “Dope” actor’s style has evolved from street goth to high-fashion throughout his career. His confidence and fashion sense has positioned him as the face of numerous campaigns and brands like, Alexander Wang and Dior Homme. He is now the artistic director for Pacsun. The “Peso” artist has released three collaborations with the footwear and apparel brand. He recently unveiled his new pair of A$AP Worldwide x Vans Slip-Ons, which will release soon. Here, we take a look at the couple’s most incomparable fashion looks.

On Jan. 11, the power couple showcased their style while heading to dinner at Giorgio Baldi in Santa Monica, Calif. Rihanna displayed her penchant for cutting-edge designer fashion as she donned items from the Gucci and Balenciaga Hacker collaboration. Riri’s fashionable outfit included a Balenciaga Women’s Natural Hacker Cocoon Puffer Gillet. She kept her hair under wraps with a scarf, the Hacker Project maxi GG print silk scarf. She accessorized her look with a pair of thick frame Gucci glasses and strappy nude sandals. A$AP Rocky wore a plaid dress shirt under a short denim jacket that included splashes of allover paint. He finished off his look with gray, bejeweled sweatpants and Dior Air Jordans 1s. He kept it safe with a white knitted head covering with a face mask attached.

Last year on Dec. 2, the duo did some shopping in New York City. For the outing, Riri sported an all-black ensemble that consisted of a padded puffer jacket that she wore over a black hoodie. She paired the look with baggy black pants and sharp pointed-toe boots. She accessorized the monochromatic look with white sunglasses and a bold red lip. Rocky wore a red varsity jacket with blue jeans and a graphic tee with a yellow trucker hat. On his feet was a pair of white sneakers.

The rapper and singer shut down the 2021 Met Gala on Sept. 13 and couldn’t take their eyes off each other as they stepped onto the carpet. The billionaire baddie donned a full look by Balenciaga that included an overcoat and matching hat. When it came down to the shoes, Rihanna opted for a pair of strappy black sandals. A$AP Rocky’s look was equally avant-garde. He appeared in a colorful patchwork quilt that was crafted by his grandmother. Underneath he wore a custom double-breasted tuxedo jacket with a ruffle shirt, which he left untucked and finished with gold floral cufflinks and black sneakers.

Last year in July, the fashion-forward couple was spotted leaving a studio in New York. The duo kept it cozy for their long night. Rihanna wore an oversized striped blue shirt over a long white T-shirt. She completed her casual outfit with a yellow hat and a clutch to match. She finished off the look with black and white sneakers. Rocky wore an all-black outfit, which included a hoodie with a black shirt and charcoal jeans. On his feet was a pair of black OG Jordan 3 Retro Cement sneakers.

The couple made their red carpet debut on Dec. 2 at the 2019 British Fashion Awards. Rihanna slipped into a mint green Fenty dress that was complete with gloves. She paired the short satin number with a diamond necklace and earrings. As for footwear, she opted for a pair of dark green pointed-toe pumps that laced around her ankles. Rocky also arrived in a Fenty ensemble. His outfit included an oversized tuxedo that he paired with a large silver ring and black and white sneakers.

See more of Rihanna’s edgy style through the years.