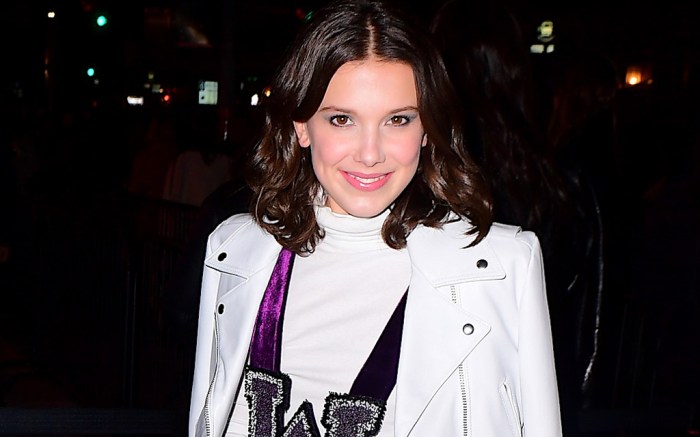 In the short time that Millie Bobby Brown hit the world’s screens making her debut as Eleven in 2016 in Netflix’s hit sci-fi drama “Stranger Things,” the young actress, who is now 17, has proven herself to be one to watch in Hollywood. Her acting skills deserve recognition and so does her style. As her career continues to catapult, so does her fashion taste. Brown has easily become a certified fashion icon as she is never afraid to make her presence known on and off the red carpet. Her personal vibe consists of girly pieces with hints of edgy and retro touches.

She is already making major moves in the fashion world. The “Godzilla vs. King Kong” star has been signed to IMG Models since 2016, appearing in campaigns for Calvin Klein, Moncler and Penshoppe. She has also been a brand ambassador for the jewelry brand Pandora since 2019. As if that wasn’t enough to seal her deal in the fashion industry, the acclaimed actress has continuously partnered with Converse on four unique collections, the most recent of which dropped in November 2021.

When it comes to shoes, the Emmy Award nominee tends to favor footwear that is comfortable and stylish. Her favorite styles usually come from Nike and Converse, though she’s also known to step out in open-toed heels, platform sandals and slingback pumps from top labels like Roger Vivier, Amina Muaddi and Tabitha Simmons.

Here, we take a look at Brown in popular sneakers through the years.

On Sept. 17, 2020, Brown kept it cozy and cute to grab dinner with friends at a restaurant in West Hollywood, Calif. For the outing, the “Enola Holmes” actress wore a white camisole fluffy top with fluffy sleeves. She completed her look with light-gray acid-wash jeans and her favorite kicks, a pair of white classic Air Force 1s.

On May 15, 2019 she looked like the ultimate cozy girl as she arrived at the Narita International Airport in Japan. The model sported a forest green sweatsuit. She tied the hoodie around her waist, which helped to showcase her gray graphic T-shirt. Brown accessorized the comfy fit with a red bucket hat, white rectangle sunglasses and headphones. On her feet was a pair of gray sneakers.

Brown was all smiles when she arrived at the Moncler Fashion during Milan Fashion Week in February 2018. The UNICEF Goodwill Ambassador served up some style. This time, she wore a shiny padded Moncler jacket, which she wore over a short black hoodie. She completed her look with loose-fitting mom jeans, cat-eye shades and a pair of futuristic black trainers.

On Nov. 20, 2018 the British actress arrived at the “Stephen Colbert Show” in an all-black ensemble. Brown opted for a black bomber jacket that she paired with a black T-shirt and black high-waist pants. She completed her monochrome look with blue metallic sneakers.

When she’s at the airport, she still pays mind to her style. Her airport outfit consisted of a gray denim jacket, which she paired with a tan T-shirt. She tied her look together with black pants the featured slits on the outside. When it came down to the shoes, she threw on some white high-top Converse sneakers.

Brown was spotted leaving the BAFTA Los Angeles TV party in West Hollywood, Calif., on Sept. 17, 2016 showcasing athleisure style in an Under Armour outfit that consisted of a coral tank top and gray leggings. The teen paired her outfit with bright coral sneakers, which matched her top perfectly. She accessorized her athletic attire with a Louis Vutton purse and Ray-Ban sunglasses.