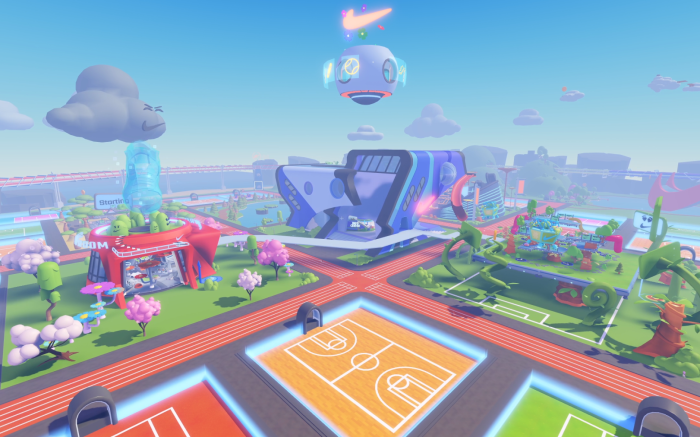 The metaverse is no longer a passing craze. These days it seems as though every brand is making — or preparing to make — the leap into the realm of virtual goods.

The metaverse refers to a virtual realm in which users can create avatars and interact with one another. As this digital realm takes off, brands are leaning into the market for virtual goods. In some cases, these goods take the form of NFTs, or non-fungible tokens, which translate concepts like supply and demand and ownership into the virtual realm.

In the last few months, multiple brands have announced forays into the metaverse, either via virtual games, products or NFTs. Earlier this year, StockX announced that it is selling its own sneaker NFTs on its marketplace. Via this experience, dubbed Vault NFTs, users can invest in NFTs that are linked to physical sneaker counterparts.

Other brands like Diesel, the Perry Ellis-owned Original Penguin, and Gap have all launched NFTs as well. Other companies have indicated plans to make similar moves in trademark filings that would cover their brands in a virtual space.

“The existing registrations that they have on these brands do not cover virtual goods because virtual goods was not a thing five or 10 years ago,” said trademark attorney Josh Gerben of Gerben Law Firm. explaining why so many brands are filing trademarks for products and phrases in the virtual world. “No one really thought that you might need protection on something like this.”

From Nike to Skechers to Forever 21, are the brands that have made moves to enter the metaverse — and the ones that could be next.

In December, Adidas Originals released its first NFT (Non-Fungible Token) collection titled “Into the Metaverse.” Owners of the NFTs received exclusive access to Adidas Originals experiences and product including virtual wearables for blockchain-based gaming world The Sandbox and other platforms, and exclusive physical product to match.

ABG owns and manages Shaquille O’Neal’s branded merchandise and also owns brands like Forever 21, Barneys New York and JCPenney. The company filed for a series of trademarks for some of these brands in January, indicating a potential for virtual goods in the future.

O’Neal, in partnership with Authentic Brands Group, filed for three trademark applications for the word “SHAQ,” in December. According to the filings, these trademarks apply to items including “non-downloadable virtual footwear, clothing, headwear, eyewear” and more “for use in virtual environments.”

ABG also filed trademarks in December for Elvis Presley and Sports Illustrated, indicating a desire to protect these brands in a new virtual realm as well.

Clarks is venturing into the metaverse for the first time with the launch of the “Clarks Cicaverse” on metaverse platform Roblox. Created by metaverse development studio Melon, the Cicaverse celebrates the footwear brand’s signature unisex children’s styles, the Cica sneaker. At the new Clarks Stadium in the Cicaverse, fans can play their own sports tournament while sporting the digital Cica sneaker.

In addition to an interactive gaming experience, users will be able to explore the virtual Clarks store. From sneakers super-charged with fire to jumbo jet packs, store visitors can purchase all the accessories needed to make their avatars stand out from the crowd and come out on top to be crowned champion of the Cicaverse. To reward the first winners, Clarks has brought to life a limited-edition gold Cica x Roblox medallion necklace that visitors can earn in the experience. To honor the British brand’s 197-year heritage, the same number of necklaces have been produced, made in Clarks’ original home of Somerset. They will be gifted worldwide. Virtually, players will have the opportunity to complete challenges to unlock this exclusive prize too.

Dick’s announced on July 27 that it had entered the metaverse with its launch of “School of Sport,” a virtual experience on the Roblox platform. The new platform allows users to compete in challenges across six virtual spaces that is meant to look like a high-school, just in time for the back-to-school season. “It is important for us to continue evolving the way we engage with consumers. We are excited to make our entrance into the Metaverse with ‘School of Sport,’ creating a space to share sport and style while also connecting with our younger athletes,” said Dick’s chief marketing officer Ed Plummer.

Forever 21, which is owned by ABG, launched an exclusive partnership in December with Virtual Brand Group, a metaverse creation company, that allows users to buy and sell Forever 21 merchandise and customize their own stores on the Roblox video game platform.

Monthly drops will occur in a new virtual world on Roblox titled “Forever 21 Shop City.” In addition to buying and selling Forever 21 accessories and clothing, users will be able to hire employees and customize their stores, all while vying to become the “top shop” in the virtual universe.

The Italian luxury brand last May participated in Christie’s online auction with its first NFT. Gucci also sold a digital version of its Dionysus bag on Roblox for about $4,115 last August, which is roughly 20 percent more than the physical object.

On May 27th, Kenneth Cole will drop his first NFT project in support of The Mental Health Coalition. The unique collection features impactful messages written by Cole in his signature hand-drawn style. One hundred percent of the money generated will be donated to The Mental Health Coalition. The NFT artwork also includes the coalition’s iconic logo, “a square peg in a round hole” to symbolize an all-too-common feeling we can all experience. To make the artwork accessible and allow more people to be part of this initial story, each one will be minted for just 0.05 ETH (approximately $100 at this time). There will also be unique rewards specific to the level of rarity for each NFT, which can be minted at KennethColeX.com.

Macy’s is launching a series of free NFTs to celebrate its annual July 4 event. The NFTs are available on a first come, first serve basis and will feature elements from the 4th of July Fireworks celebration. the NFTs live in the Polygon blockchain.

New Balance filed three trademark applications in mid-January, which outline the potential for the brand to sell virtual shoes, clothing and sports equipment under the New Balance name.

In December, Nike Inc. acquired RTFKT, a digital creator of virtual sneakers, collectibles and accessories. Before that, Nike filed seven trademark applications related to its goal to create and sell virtual sneakers and apparel.

Nike also partnered with the Roblox video game platform to launch “Nikeland,” a digital world for Nike fans to play games, connect, and dress their avatars in virtual apparel via a digital showroom, which includes products like the Air Force 1 and Nike Blazer.

President and CEO Nancy Green told CNBC’s Lauren Thomas at NRF’s Big Show in January that she thinks “the whole future of digital assets is exciting. I love the fact that the Gap brand took its first step into this territory last year. We’re always sharing and learning across brands at Gap Inc. and translating what these learnings mean for each brand. We’re always looking at what the possibilities are in the future.”

On June 29, Old Navy will launch its first ever series of digital collectibles based on its dog mascot and themed around the Fourth of July. The launch is in partnership with NFT platform Sweet.

Puma suggested that it will make and sell “downloadable virtual goods” such as footwear, clothing, headwear, eyewear and bags, according to trademark applications.

Skechers signed a lease in the virtual Fashion District of Decentraland. The company also filed trademark applications to sell virtual goods such as footwear and apparel. “Our Decentraland agreement is an investment in our future,” said Michael Greenberg, president of Skechers. “We look forward to embarking on this virtual era, and exploring creative ways for our brand to engage with new customers and audiences as we launch the new Skechers experience.”

The Baltimore, Maryland-based brand last month released its first-ever digital good in the form of 2,974 NFTs, or non-fungible tokens, that are digital replicas of the Genesis Curry Flow shoe Steph Curry wore when he broke Ray Allen’s NBA three-pointer record on Dec. 14.

According to Under Armour, each digital shoe can be worn in three pre-programmed gaming ecosystems (Gala Games, Decentraland, and Sandbox), making it the first functional metaverse shoe.

CNBC reported in January that Walmart had filed several trademark applications that suggested a possible move towards making and selling virtual goods in the metaverse.

Walmart’s filings also suggested that the retailer would offer virtual currency and NFTs. Walmart told CNBC in a statement that it is “continuously exploring how emerging technologies may shape future shopping experiences.”

GOAT Group: When asked about the possibility of entering the metaverse, GOAT Group COO Yunah Lee said “Anything is possible” at the company’s virtual presentation at the 24th annual ICR conference in January. “NFTs, Web 3.0, we continue to watch very closely and we do think that these spaces will continue to converge,” she said.

Stitch Fix: CEO Elizabeth Spaulding told CNBC’s Lauren Thomas at NRF’s Big Show in January that there is no immediate plan for the company to enter the metaverse. “No plans as of yet, but I think there’s a lot about the ecosystem we’re building now that could translate to the metaverse down the road,” she said.

Hermes: CEO Axel Dumas said in a call with investors in April that the company is paying attention to advancements in the metaverse. “We’re looking at these innovations and how they could conceivably be of interest to us,” Dumas said. “This may be a good means of communication, but after all, we’re first and foremost, artisans.” He added that the company has yet to determine the best way to create objects in the metaverse, and is taking its time to explore options.

Ralph Lauren: CEO Patrice Louvet said at NRF’s Big Show that the metaverse is a great way to reach younger consumers. “There are a lot of parallels actually between the metaverse and Ralph’s vision because we are not a fashion company. We are in the dreams business,” he said.