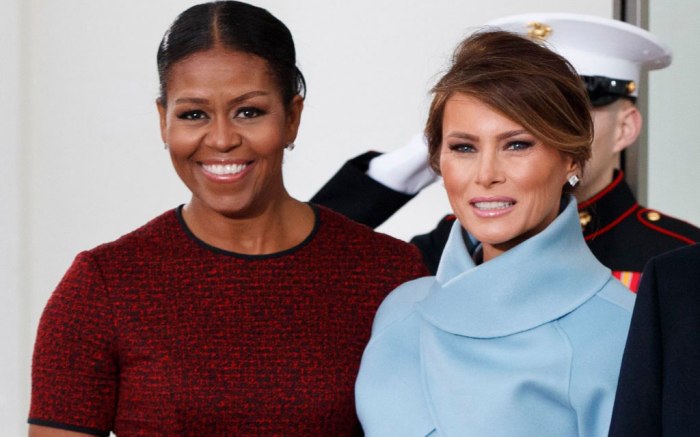 As a first lady, your fashion choices are bound to be scrutinized — and that’s certainly held true for both Michelle Obama and Melania Trump.

When Obama was first lady, she upped the profile of several high-end American labels, among them Jason Wu and Tanya Taylor.

“I wanted to draw attention to and celebrate American designers, especially those who were less established, even if it sometimes frustrated the old guard, including Oscar de la Renta, who was reportedly displeased that I wasn’t wearing his creations,” she wrote in her 2018 bestseller, Becoming.

The attorney often would mix high-end pieces with affordable finds from brands like Target and The Gap. When it came to footwear, Jimmy Choo’s pumps were a particular favorite.

Since leaving the White House, Obama has become a bit more experimental with her style. While Jimmy Choo’s classic stilettos remain a favorite, she’s gone for some more out-there styles. For instance, she made headlines for her thigh-high gold Balenciaga boots last year.

Meanwhile, Trump has been a loyalist to two shoe silhouettes throughout her time at 1600 Pennsylvania Ave. — Manolo Blahnik’s BB pump and Christian Louboutin’s So Kate.

With respect to clothing, Trump shares an affinity for Michael Kors with her predecessor. Additional favorite labels include Dior, Dolce & Gabbana and Calvin Klein.

Like Obama, the ex-model has also mixed in more affordable styles from time to time, including Timberland boots and Adidas Stan Smith sneakers.