Megan Thee Stallion’s Style Evolution Is on Another Level 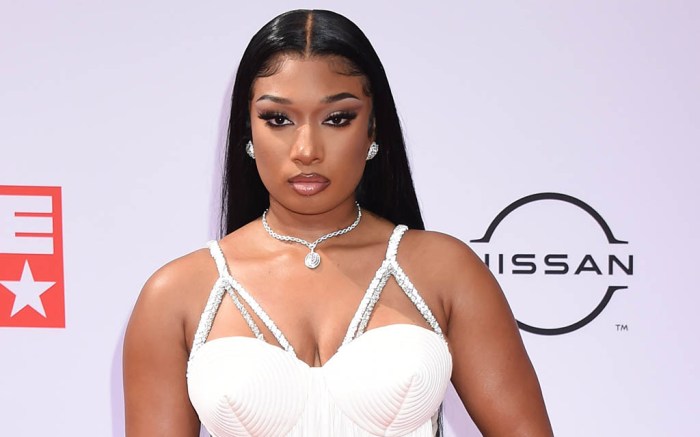 Megan Thee Stallion has elevated female rap to another level. The Houston “hottie” followed in the footsteps of her icons like Nicki Minaj, Lil Kim, and Trina to create a new hip-hop flow that uplifts women.

The three-time Grammy winner knows the hip-hop industry and dresses the part for every performance, red carpet appearance and everyday street style. Megan Thee Stallion is often spotted in sensual clothes with cutouts, cropped hemlines or no pants at all. The 5-foot-11 rapper towers over her fellow female entertainers, but still embraces height-elevating platform boots and stilettos for more of a boost. Megan’s alter ego “Tina Snow” helps the rapper portray a glamorous, softer side with rhinestone heels and pastel satin clothing. And the industry has taken notice of her style savvy. She is a brand ambassador for Coach, Revlon and Nike.

Here, we take a look at some of her fashionable moments through the years.

When the proud Houstonian went out with friends to Delilah restaurant on June 7, 2019 in West Hollywood, Calif., she wore a yellow and black striped jumpsuit with a diamond chain. The black sandals featured a brown furry front with heart details. Megan shined on the blue carpet at the 2019 BET Awards in Los Angeles on June 23. The rapper wore a gold rhinestone bra and skirt set with a matching choker. The bra top had draping chains over the rapper’s midriff, and the skirt featured two thigh-high splits. On her feet were rhinestone caged ankle boots with peep-toe fronts. The H-town “hottie” turned up the heat in a see-through bodysuit and fishnets at the Yola Dia Music Festival in Los Angeles on Aug. 18, 2019. The black bodysuit had an open front that exposed the entertainer’s bralette. The neckline and fronts showcased colorful stone embellishments. The rapper wore thigh-high black leather boots over her fishnet tights. At BeautyCon LA on Aug. 11, 2019, the “Big Ol’ Freak” rapper wore an all-red ensemble. The red wrap blazer was closed by a red Chanel belt, but still managed to show the rapper’s red lace bra. In place of pants, Megan chose red Fendi tights with the brand’s logo allover and wore red PVC mule heels. Gracing another red carpet in a revealing look, the award-winning rapper attended the 2019 MTV Music Video Awards on Aug. 26 in New Jersey. The star wore a black leather three-piece set consisting of a bra top, high-waisted hot shorts and matching blazer. The leather ensemble featured lots of pearl and rhinestone appliqués. The rapper’s knee-high satin boots had the same design going up her legs. Megan went slightly modest for Rihanna’s Annual Diamond Ball on Sept. 12, 2019 in New York City. The “Fever” rapper wore a black sequin gown with a sweetheart neckline and thigh-high split. She matched it with black velvet elbow glows for an old Hollywood feel. Megan accessorized with a diamond encrusted watched and diamond bracelet on each wrist and black suede pointed-toe pumps. Animated character Jessica Rabbit may have been the inspiration for Megan’s American Music Awards outfit on Nov. 24, 2019. She wore a red ruched gown featuring a deep V-neckline and a thigh-high split. The gown was covered in sequins and matched her red rhinestone clutch. She opted for red ankle strap sandals with leopard furry front straps.

The breakout star took home three awards on March 14 at the 2021 Grammy Awards in Los Angeles. Megan wore an orange Dolce & Gabbana column gown with an extra thigh-high split and a gigantic bow trailing the back. The diamonds on her neck weren’t the only jewels shining since her orange chunky heels were covered in iridescent rhinestones.

Megan went high-fashion for the BET Awards in Los Angeles on June 27, 2021. She wore a Jean Paul Gaultier pale pink gown with cone-shaped bustier. The sides of the dress were completely open and held together by rhinestone straps. The BET Award-winner wore silver rhinestone heels to match the rhinestone straps of her dress. The Coach ambassador was dressed by her partner for the 2021 Met Gala in New York City on Sept. 13. The pale pink Coach dress featured an asymmetrical tulle ruffle across the rhinestone body. Megan was styled with gold glitter heels for a neutral shine.

See more of Megan Thee Stallion’s style through the years.