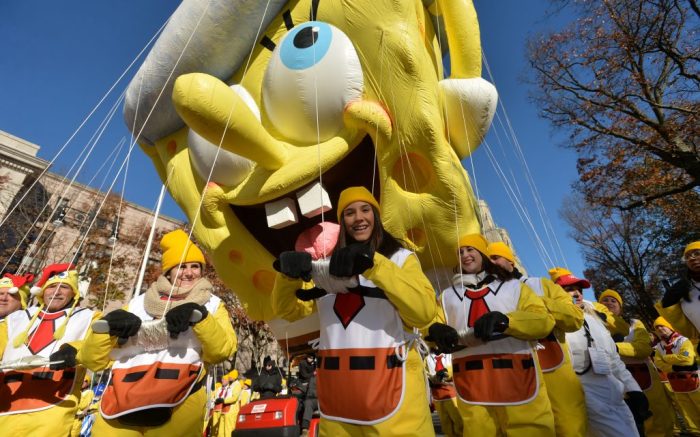 Now that November is underway, we’re all thinking of the next big holiday: Thanksgiving.

Along with turkey and all the trimmings, one of the oldest, most beloved traditions at this time of year is Macy’s Thanksgiving Day Parade. Concluding outside the block-long Macy’s Herald Square flagship store in New York City, the parade has been held since 1924 and helps kick off the festivities on the last Thursday of November.

As the 2019 Macy’s Thanksgiving Day Parade approaches, FN has everything you need to know about the event.

When does the parade start?

The 2019 Macy’s Thanksgiving Day Parade takes place on Thanksgiving Day, Thursday, Nov. 28, from 9 a.m. to noon ET. Viewers on the West Coast won’t need to wake up at the crack of dawn to watch it; the television broadcast on NBC will air at 9 a.m. across time zones.

How can I watch the parade?

Venturing to Manhattan for the big day is not for the faint of heart: Parade goers begin camping out at 6 a.m. to nab prime viewing spots on Central Park West, often braving below-freezing temperatures along with the massive crowds. As in years past, the NYC Police Department is expected to be out in force providing security.

Those hoping to enjoy the action from outside the city — or indoors — can watch on television. NBC, which has exclusive rights to the official program, will broadcast all the action from 9 a.m. to 12 p.m. in all time zones. Savannah Guthrie, Hoda Kotb and Al Roker of the “Today” show are hosting the broadcast. CBS will be host its own annual parade coverage at the same time, though this is not the official program.

What celebrities are performing?

The parade brings out some of the biggest names in the entertainment industry each year, and 2019 is no exception. Fans viewing on NBC can look forward to performances from TLC, Ciara, Ozuna, Lea Michele, NCT 127 and the Black-Eyed Peas, to name a few.

Are there any new balloons to watch for?

Smokey Bear is returning, following more than two decades out of the parade lineup. Spongebob Squarepants will be joined for the first time by pet snail Gary, while Snoopy has gotten an astronaut suit makeover. Artwork by Yayoi Kusama and a “Green Eggs and Ham” design also adorn new balloons. See Macys.com to find out what other characters are appearing.

What about the floats?

There will be plenty of balloons, celebrity guests and performances, but the floats are arguably the real star of the show. Macy’s will have a cornucopia-themed float on the parade route. Entenmann’s baked goods company will showcase a bake shop, the Green Giant vegetable brand will have its mascot giant standing more than two stories high and Ronald McDonald will drive down the route in style in a Big Red Shoe that’s equal to a whopping men’s size 266.

See the Macy’s Thanksgiving Day Parade through the years.