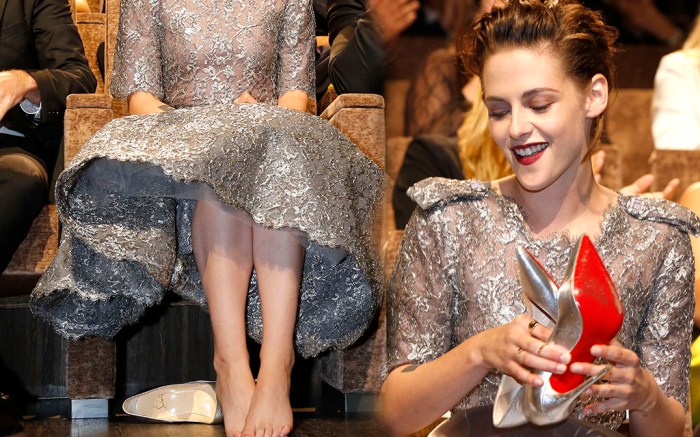 Kristen Stewart is known for her rebellious take on traditional styles, from suiting to formal gowns. However, she’s a red carpet rebel in more ways than clothing; Stewart also has a history of being barefoot at events including the Oscars, Cannes Film Festival and Venice Film Festival — some of the most formal and coveted occasions for the film industry.

Never one to shy away from making her views heard — or, in this case, seen — Stewart’s been one to watch as early as 2010, when she was revealed as barefoot beneath a black gown at Vanity Fair’s Oscars afterparty. However, it’s worth noting the move has made her even more of a star to focus on at red carpets — not just for her bold fashion choices, but also her bold attitude. It’s also noteworthy that the shoes in question are typically pointed-toe pumps with 4-5-inch stiletto heels, which she’s consistently worn throughout her career.

RELATED: The Anatomy of a High Heel & Everything You Didn’t Know

In 2015, Stewart arrived in a silky silver, lace-trimmed couture gown by Chanel. The elegant piece was paired with metallic silver Christian Louboutin pumps with pointed toes and thin stiletto heels, which she swiftly removed to sit alongside cast members including Nicholas Hoult later in the evening.

During the 2016 Cannes Film Festival, Stewart made waves for removing her Louboutin pumps after a photocall for “Cafe Society.” Paired with a white crop top and bodycon skirt, the pair included black and white marbled-print uppers with slick gold stilettos. Soon after the photocall, the shoes came off and Stewart strolled throughout Cannes barefoot.

Perhaps most memorable was Stewart’s 2018 Cannes Film Festival appearance at the “Blackkklansman” premiere as a jury member, where she wore a shiny silver Chanel minidress with spiky triangular sequins. Once again donning Louboutins, the star removed her black silk pair — in drizzling rain, no less — to walk up the red carpet, receiving praise from fans and press around the world. The move was specifically made to rebel against the Festival rules that women at gala premieres are required to wear heels, and strictly “no flats.”

For the 2019 premiere of “Charlie’s Angels” in London, Stewart boosted a plaid silver and black Thom Browne gown with black strappy stiletto sandals. However, following the red carpet, the actress — with Swennen’s assistance — set her bare feet on the carpet as she swapped her heels for a pair of low-top white leather Nike sneakers. Both pairs accentuated her gown smoothly; the sandals gave it an elegantly sleek base, while the subsequent sneakers added a boost of rebellious retro energy.