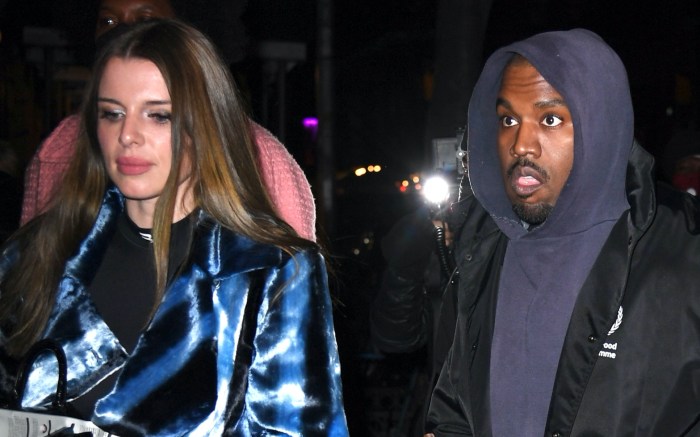 New relationships are filled with change—and for Kanye West, that includes makeovers for his new girlfriends.

Over the years, the rapper has gained a reputation for influencing his current dates’ personal style—even going as far as to purge their wardrobes and purchase brand-new ones. Though West’s own aesthetic has shifted, the formula of looks he dresses girlfriends in remains the same: a deep dive into sleek formalwear, as well as trend-defining pieces like statement gowns, shapewear and bodysuits.

West also often highlights brands of the moment in the wardrobes of the women he dates. A prime example is Kim Kardashian, who frequently wore Balmain, Givenchy and Balenciaga pieces—three brands that defined the mid- to late 2010s—while dating and marrying West. Most recently, current girlfriend Julia Fox was treated to a suite of clothing from Balenciaga and Diesel on the couple’s second date in New York City.

Below, we discover the style changes behind Kanye West’s relationships over the years—and how he impacted his girlfriends’ style.

During her 2008-2010 relationship with West, model Amber Rose did have occasional style transformations in lieu with the rapper’s methods of dressing. The actress’ go-to colorful outfits were occasionally swapped for ensembles in hues of tan, black and white, coordinating with West’s on occasion. “I’m more electric pink and bright yellow. And Kanye’s more like nude and bone,” Rose told Elle in a September 2009 editorial. “Like, bone is his favorite color. I’m like, whose favorite color is bone?” That editorial was also styled by West, who dressed Rose in slim-fitting bodysuits and dresses in black, nude and embellished tones from Blumarine, Sportmax and Armani.

While dating West in the late 2010’s, Ebanks’ style shifted from bold colors and prints to solely black, gray and gunmetal tones. Occasionally punctuated with sequins, studs and furs, her sleek looks were part of the head-to-toe neutrals trend that West was a leader of at the time. The shoes she wore in this period were equally slick, including pointed-toe and platform pumps in similar hues from brands like Christian Louboutin.

While dating before their 2014 marriage, Kanye West overhauled Kim Kardashian’s maximalist wardrobe in a 2012 episode of “Keeping Up with the Kardashians.” In place of Kardashian’s staple bandage dresses, platform pumps and statement necklaces came minimalist bodycon dresses, slim-fitting gowns and monochrome outfits from brands like Givenchy, Tom Ford, Balmain and Balenciaga. The transformation didn’t end there, however. Kardashian also served as a muse and campaign star for West’s streetwear brand Yeezy, and continued her sleek style streak into the 2020’s with numerous Balenciaga outfits during their divorce.

From May-August 2021, West dated supermodel Irina Shayk. Though Shayk’s always had an edgy and daring sense of style, her ensembles—similarly to past girlfriends of West’s—began to incorporate more black and beige tones, as well as distressed denim. Current trends also gained a larger presence in the model’s wardrobe, such as utilitarian jumpsuits, oversized blazers and corset tops from brands like Versace, Mugler and Burberry.

In the fall of 2021, Wets briefly dated model Vinetria. The 22-year-old’s style appears to always have featured neutral hues and slim-fitting silhouettes. However, the period when she dated West appears to have removed bright colors from her wardrobe entirely. In one notable image from this time, Vinetria stepped out in an all-black outfit that featured a trendy corset top, jeans and puffer jacket.

West’s most recent girlfriend, Julia Fox, was given a wardrobe overhaul early in their relationship—in fact, on their second date at Carbone in New York City last week. The “Uncut Gems” actress, who’s been spotted in sleek black dresses and pumps on the red carpet, was gifted a new wardrobe by West filled with pieces from streetwear-focused brands like Balenciaga and Diesel. While leaving the restaurant, Fox was spotted in one of her new outfits that may be defining of her future style: a black top and pointed-toe boots, paired with matching Miaou thong-strap pants and a leather coat and handbag by Balenciaga.