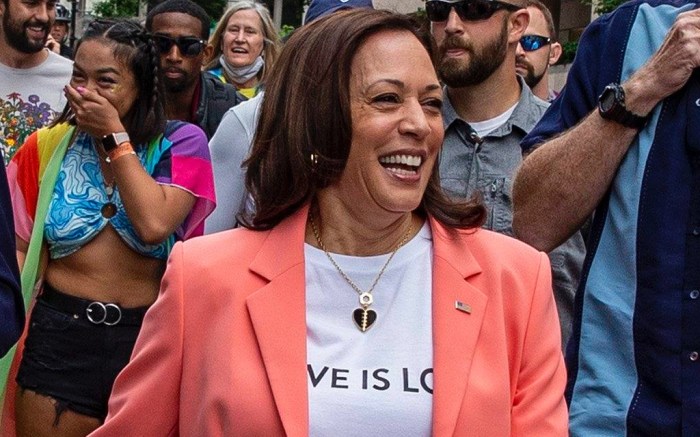 Vice President Kamala Harris has had an especially fashionable year, which we’re looking back on as we reflect on 2021.

The first female Vice President of the United States has a range of style signatures. Similarly to First Lady Jill Biden, Harris’ looks contain pieces in neutrals and jewel tones that are easy to mix and match. However, she does have several specific style signatures—most notably her go-to power suits, hailing from brands like Altuzarra, Proenza Schouler and Carolina Herrera. Layered over neutral blouses, these are often paired with strings of pearls in homage to Harris’ sorority, Alpha Kappa Alpha. Her off-duty or casual ensembles typically include standard jeans and T-shirts.

Harris’ footwear is equally versatile, with distinct on- and off-duty pairs. While in office or at formal events, she typically opts for pointed-toe pumps in neutral leathers or suedes by Jimmy Choo and Manolo Blahnik. Blahnik is also one of Harris’ go-to designers, as she’s frequently seen in his ankle and knee-high boots as well. The politician’s casual looks usually feature Converse sneakers, though she’s also been spotted in boots from Prada and Timberland.

One of Harris’ most viral looks this year came courtesy of the 2021 Presidential Inauguration in January, held at the U.S. Capitol Building. For the occasion, Harris wore a violet Christopher John Rogers knee-length dress and coat, paired with sheer tights, black patent leather Manolo Blahnik BB pumps and a Wilfredo Rosado pearl necklace.

While in office, the Vice President has already become known for her matching suit sets for any occasion. The tone was set early in her tenure, with January 26 a prime example. Harris wore the same gray Dolce & Gabbana trousers and blazer to receive her second dose of the COVID-19 vaccine and swear in United States Secretary of the Treasury Janet Yellen. Her shoes of choice were her same Manolo Blahnik pumps from the 2021 inauguration, proving the power of a staple shoe.

Harris’ off-duty looks are decidedly more casual, often including classic blue jeans and low-top Converse sneakers. One example is the 2021 Capital Pride Parade in June, where the Vice President wore a pair of white Chuck Taylor All Stars with blue jeans, a peachy pink blazer and “Love is Love” graphic T-shirt by Prabal Gurung.

Though Harris rarely dons formalwear, she opted for an elegant ensemble for the 2021 Kennedy Center Honors this month. For the occasion, Harris donned a black Michael Kors gown with cape-like sleeves trimmed in crystals. Her look was complete with black pointed-toe pumps.

Click through the gallery for more of Kamala Harris’ signature style moments in office.