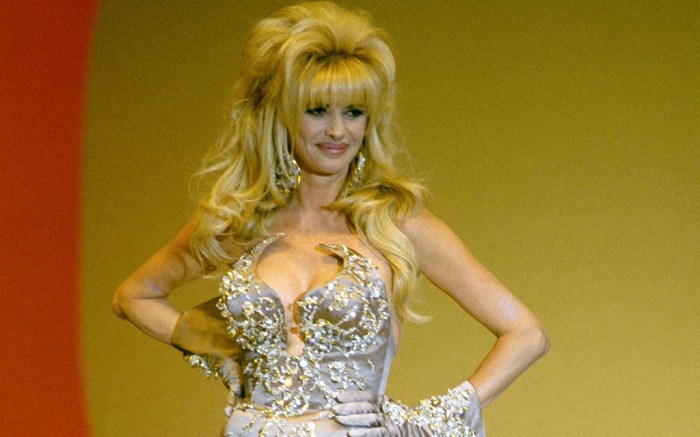 Ivana Trump — ex-wife of Donald Trump and mother to Donald Jr., Eric and Ivanka — died of injuries sustained in a fall on July 14 in her New York City home, according to the medical examiner and officials. She was 73.

Though Ivana had many titles throughout her life — competitive skier, model, author, businesswoman and more — she was especially noted for her work in the fashion industry, a passion that took many forms throughout her life. Whether on the red carpet or walking the runway (and seated front row), Ivana was noted for her glitzy fashion sense and ever-voluminous blond hair, both at their prime during her 15-year marriage to Trump.

From her roots as a gig model to her success as a home shopping style guru, Ivana made an indelible mark on fashion throughout her life and career. In fact, her passion for the industry is the reason she met Donald Trump, solidifying her status as a style star and socialite.

Ivana first started in the fashion industry as a model

Born in 1949, Ivana was a competitive skier in her home country of Czechoslovakia from childhood to college. After university, she immigrated to Canada in her mid-20s, soon finding work as a model represented by a Canadian agency in the mid-’70s. Ivana actually met Donald while on a modeling assignment in New York City in the summer of 1976. Her agency sent several models, including Ivana, to New York to promote the Olympic Games held in Montreal later that year. A night out brought the models to an “overcrowded, trendy restaurant where they were immediately seated at a special table — compliments of a man named Donald Trump,” according to her official bio.

During her short modeling career, Ivana appeared in ads for Canadian department store Eaton’s and Canadian fashion brand Auckie Sanft. And though Ivana is often cited as a “former model,” that isn’t necessarily how she defined herself, even while in the midst of being a signed personality.

As a socialite, Ivana made notable fashion connections

Ivana quickly became a prominent New York City socialite due to her 1977 marriage to Donald Trump. Soon after meeting Donald, she shed her agency ties and stopped pursuing modeling gigs. But Ivana’s time in fashion didn’t end there.

As a socialite and newly-minted member of a high-profile New York City family in the ’80s, Ivana began rubbing elbows with luxury designers, including Dennis Basso and Thierry Mugler. She served as Mugler’s muse for several years, even walking in his 1992 Paris Fashion Week runway show. She also closed out a fashion show for Basso in the late ’80s.

During her marriage to Trump, Ivana did interior design work for several Trump properties, including the Trump Hotel. She’s especially noted for turning the hotel into a runway-ready location for some of the biggest names in fashion to show collections. During Ivana’s reign in the ’80s, the Trump Hotel hosted runway shows by Carolina Herrera, Oscar de la Renta, Arnold Scaasi and more.

Ivana eventually came into her own as a designer

But Ivana wasn’t content merely wearing designer labels. She wanted to take on the fashion industry first-hand. Following her divorce from Donald in 1990, Ivana launched her own line of clothing, costume jewelry and cosmetics called Ivana Haute Couture sold on the Home Shopping Network and the Canadian Shopping Channel. She also launched her own fashion and fragrance company, House of Ivana, in 1995.

Ivana continued to nurture her interest in fashion in what would be her final years, up-keeping her own signature style. With her blond bouffant always perfectly in place, Ivana was noted for her love of ultra-glamorous style, maintaining an affinity for sequins, crystals and lace from her days as a budding socialite to her years as a New York City society fixture.