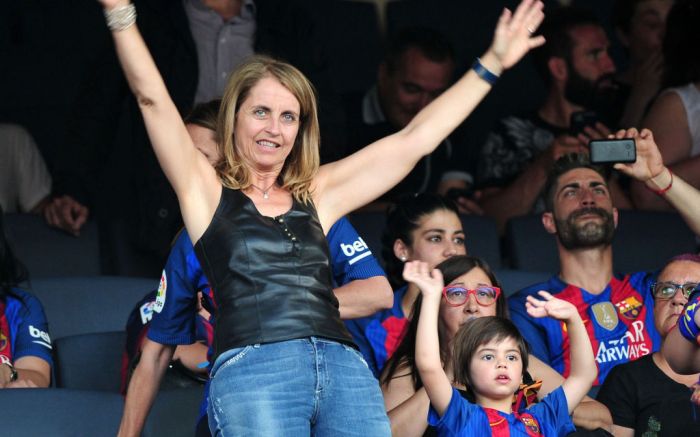 Montserrat Bernabeu’s name is ringing bells more than usual lately. The mom to Barcelona footballer Gerard Piqué and former mother-in-law of singer Shakira has managed to stay behind the spotlight over the years. Still, Bernabeu had a few red carpet and festive moments getting attention in the media.

In 2013, the doctor showed support for her son with Shakira and grandson Milan at Camp Nou in Barcelona. Bernabeu wore an aqua-colored cardigan with light denim jeans and long gold necklaces.

Bernabeu snapped it up with Shakira’s parents, Nidia Ripoll and William Mebarak, during the “Jaime de la Iguana Exhibition” opening in 2013 at Palau Robert in Barcelona. Bernabeu opted for minimalist dressing in a brown and black cowl neck top and matching skinny jeans. She put on black leather boots with a small raised heel to coordinate with the look.

Gerard Pique’s mother celebrated with her grandson Milan Pique while attending the Copa del Rey Final match between FC Barcelona and Alaves FC in 2017. This time, she paired a sleeveless leather top with denim jeans and a pendulous necklace. Her hair was styled in a classic side-part hairstyle.

At the Spanish Copa del Rey Final match between Barcelona and Sevilla in 2018, Bernabeu slipped on a cozy fringe-trimmed coat with a stand collar and open, cascading front. The relaxed silhouette fell to her knees over a casual top and denim jeans.

Bernabeu posed with her husband, Joan Piqué, and their son, Gerard, during the Davis Cup official dinner in 2019 wearing a black turtleneck and black pants with a larger-than-life caramel brown fur coat. On her feet, she selected Jimmy Choo Kix heeled ankle boots designed with brown and black printed pattern textured leather, zip fastening and a pointed toe. The beige and black sole is made of suede and rubber.

At the end of 2022, Bernabeu attended the “Kings League” presentation in Barcelona with her husband, Joan Pique. They both kept it casual in laidback looks, with Bernabeu in a leather moto jacket and distressed denim. To match the vibe, she wore Rick Owens x Converse Turbodrk square-toe high-top sneakers known for their waxed cotton twill for a shiny effect, signature squared rubber toe caps, elongated tongues and toe vents.