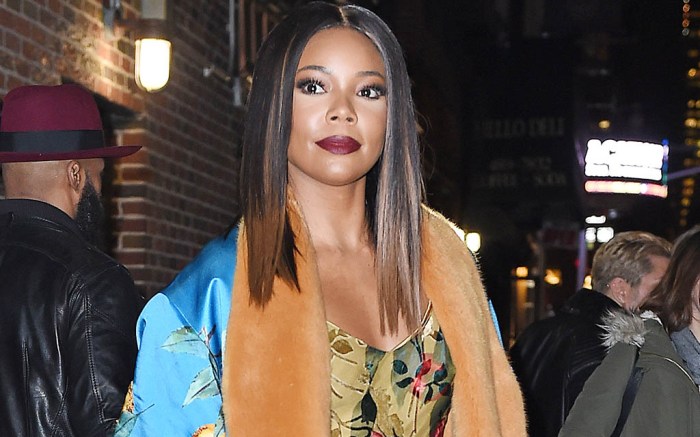 Gabrielle Union is a style icon. Whether it be for the fashion in “She’s All That” and “10 Things I Hate About You” or her dancing in “Bring it On,” the actress is multitalented.

Union may be known for her work on the big screen, but her fashion has also garnered interest. It’s clear that Union has made a mark on the fashion world, contributing to the Y2K movement thanks to her filmography. Think of iconic movies like “Bad Boys” and “Love & Basketball.”

Off the big screen, Union has worked with brands like New York & Company to bring audiences a dreamy collection worthy of any wardrobe. On and off the red carpet, Union is known to turn heads.

Union started off strong in very Y2K fashion on July 26, 2001 in Los Angeles at the “Rush Hour 2” premiere. Union posed on the red carpet wearing a minimal outfit made for the times. It’s a simple dress with geometric patterns and spaghetti straps, something almost every girl in the 2000s wore. On her feet, Union had on strappy sandals with a short heel.

From 2008 onward, Union diversified her wardrobe, trying on new silhouettes and making bolder pattern choices. At the “Cadillac Records” premiere on Dec. 1, 2008, the actress wore a black, sleeveless jumpsuit with a collar. She accessorized with a vinyl Louis Vuitton bag with fur trim and two chunky rings. For shoes, Union kept it simple with strappy black sandals. The look capitalizes on the trends of the time like big bags, designer logos, and of course, chunky jewelry.

While at Los Angeles International Airport on Oct. 1, 2015 Union wore a matching black ribbed maxi skirt and crop top. On her feet, Union had on a pair of white low-top sneakers and accessorized with a wide-brimmed hat and black sunnies.

Adding a bit of color and texture into her wardrobe, Union was seen in a multicolored furry coat  and black trousers on Jan. 10, 2017 leaving the “Good Morning America” set. The oversized coat is perfect for the colder months. It’s a bolder choice for the actress. It diversified her look, bringing in color and texture all at once. She added even more vibrancy by stepping out in a pair of blue strappy heels.

Keeping it colorful, Union stepped out in an intricate outfit on Jan. 11, 2017 for an appearance on the “Late Show With Stephen Colbert.” As the years go by, the actress has learned to let loose, adding color and texture into her looks. Union goes adventurous in a yellow furry coat with blue sleeves and a bodycon floral slip dress. Once again, she opted for a pair of strappy heels, this time in gold.

Union makes a case for women’s suits in a relaxed pink outfit at the CinemaCon Big Screen Achievement Awards in 2018. Her wardrobe has gotten much colorful since the early 2000s; the starlet has demonstrated diversified tastes as she’s gotten older. The silky suit combo is paired with platform sandals with a hint of glitter on the sole. It’s a disco-esque look that doesn’t take itself too seriously.

Nowadays, Union’s outfits follow a similar formula that they have had for some time now. The silhouette, color, texture and pattern are always uniquely Union, encapsulating trends of the time. For instance, Union was seen wearing a floral pleated gown with exaggerated sleeves and open-toed, pastel-colored strappy heels on Sept. 13, 2021 while arriving at her hotel in NYC. She often coordinates with her husband, NBA star Dwyane Wade.