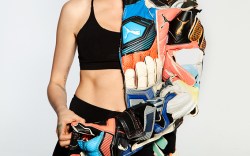 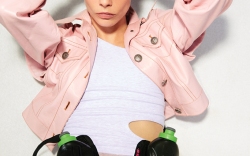 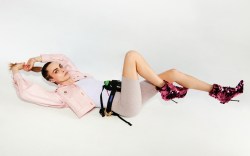 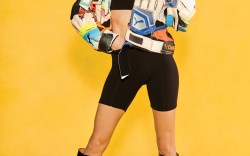 Cara Delevingne has never been one to hold back. From her days on the runway and in front of the fashion lens, to her burgeoning acting career (ramping up again with a spot on the second season of “Only Murders in the Building” and a string of new films), the model and actress is rarely shy about her expressing how she feels. And she’s taken that no-holds-barred approach to activism, too, advocating for LGBTQIA+ and women’s rights and mental health as well as environmental issues, expressing herself through initiatives and the red carpet alike to communicate her message of action.

Recently, her long-term partnership with Puma has resulted in a low-impact athletic collections, launching her own charitable foundation and even launching a new eco platform later this year in alignment with the United Nations Decade on Ecosystem Restoration.

But if her work sounds serious, rest assured that the actress is still having fun at the same time. As part of FN’s cover story, Delevingne played “The Shoe Game,” answering a series of footwear-related questions that reveal a lot about the star’s life in shoes:

The shoes you wore as a kid?

Ooh my favorite pairs of shoes… I don’t know, I was always barefoot, and I was always naked. Yeah, it would be a struggle to put me in a pair of shoes in general, I would run away. So probably my own feet — which is good.

The shoes you wore in high school?

I would over wear a pair of trainers – sneakers – or like the same pair of leather boots with a hole in the toe, with my pinky toe sticking out of the side. It was quite gross. I would just wear the same thing. It just really meant something to me when it stood the test of time if I could wear the same pair of shoes.

Have you ever borrowed shoes from your sisters?

I did borrow shoes from my sisters, yes, from my middle sister Poppy. When I was modeling, she had the shoes that I needed. But she definitely had all of the shoes that I would ever need. I was still in my teenage years and wearing my trainers. So she would have the heels with like the cool leather strappy things that I just, I don’t know where she got them from. So yes, definitely.

Favorite pair of shoes living in your closet right now?

I’m still such a big fan of the old Puma Creepers. I still have loads of those, she [Rihanna] just did them right.

What shoes do you wear at home?

What shoes do I wear at home? I’m a really big fan of slippers. I have some really cute penis slippers that I just love to slip my feet into.  I just love them, they make me feel really good.

Does your dog ever eat shoes?

My dog doesn’t like to eat shoes, but he does like to wear those little balloon socks, when we moved to New York. They’re so cute. I did originally just get balloons and stick them on his feet, which he didn’t like. But dogs can wear shoes, they’re really cute. He does not have any proper shoes, he just has the balloon socks, I don’t know how else to describe them, other than they stop his little paws from getting eaten by the salt!

Sneakers or heels – and why?

Trainers or heels? Sneakers or heels? Obviously trainers all day, every day. I’ve seen someone try to make a pair of trainer heels, don’t ever do it, that’s illegal. It shouldn’t be allowed. Ugh! I love trainers so much. Heels were made by men, clearly.

The shoes you wish you still had?

When I was really young, I had this pair of trainers I don’t remember what brand they were, that’s not the point. I loved them so much that my family cut off the toes so that my toes would stick out the front. That’s how much I loved them. I remember that.

How many pairs of shoes do you own right now?

Well I have a shoe closet, I’m not going to lie, I’m a bougie, bougie shoe b*tch. But literally they’re all Pumas, which is great. I have two pairs of strippers heels and Pumas, that’s all I have. I do have a lot of matching shoes, so when my friends come over we just wear the same pair of trainers.

What shoes do you wear on date night?

No shoes. No shoes on date night are the preferable shoes. Depends on how the date is going!

What shoes do you travel in?

The pair you’ll never get rid of?

The pair I’ll never get rid of… um, my penis slippers, I don’t know, I can’t tell you on that one.