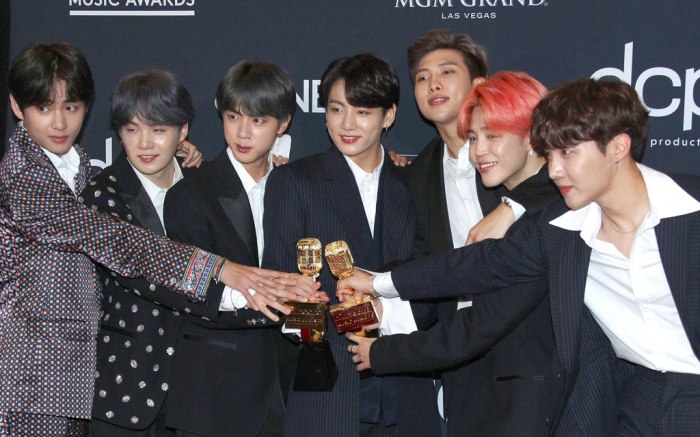 The boys of BTS are making waves with more than just their music.

Since the seven-member group’s founding in 2010, Jungkook, Jimin, V, Suga, Jin, J-Hope and RM have achieved international stardom, beloved by fans for both their tunes and their fashion. While the boy band took some time off in 2019, they still managed to make plenty of sartorial statements.

In May, BTS showed off their colorful style on an episode of “Britain’s Got Talent.” The members wore pastel suits with white sneakers, with some opting for dad shoes and others choosing simpler silhouettes. Suits came in lavender, baby pink, cornflower blue and salmon.

Earlier that month, BTS appeared in style on “Good Morning America” The septet coordinated black or gray suits custom-made by Dior with white or black sneakers.

On May 1, the group selected more dressed-up takes on suiting style for an appearance at the 2019 Billboard Music Awards. All seven wore tailored suits and shiny black boots or dress shoes.

In addition to their headline-making red carpet and onstage look, the BTS boys are also involved in the shoe space. The group was announced in October as Fila’s newest brand ambassadors. Before inking a deal with the sportswear company, BTS worked for five years with Puma.

Click through the gallery for more of BTS’ best style moments of the year.