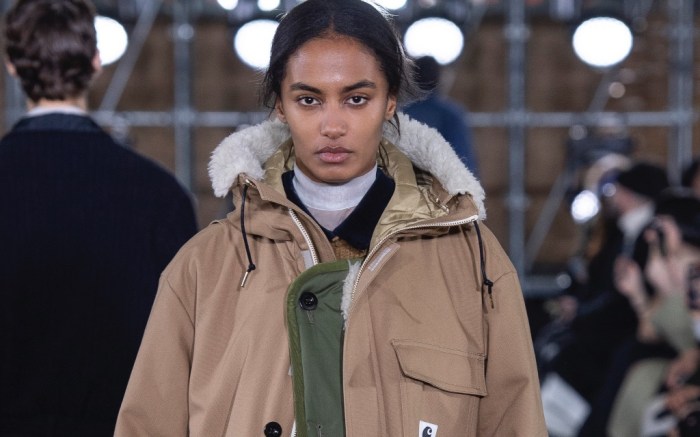 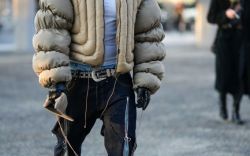 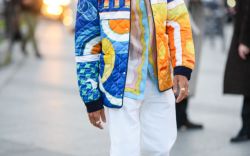 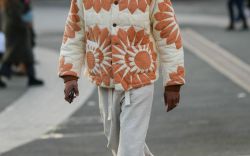 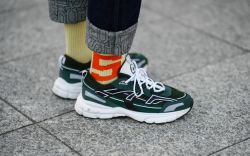 Sacai’s latest collection by Chitose Abe hit the runway with a bang, as well as a new collaboration: the label’s debut line with Carhartt WIP.

Revealed on Sunday in the brand’s spring 2023 menswear show during Paris Fashion Week Men’s, the runway included Abe’s vision for Carhartt’s staple utilitarian workwear with a softer edge. The WIP line featured Carhartt’s signature multi-pocket chore jacket in numerous iterations, including gold-buttoned black shearling for a sophisticated finish. Another style was a utilitarian parka, featuring an olive green base with a tan shell, trimmed with black buttons and soft shearling for added warmth.

Abe’s revamp of Carhartt’s codes could also be seen in the collaboration’s knitwear, which brought the brand’s utilitarian nature a softening with smooth blue hues. The aesthetic merge could be seen in ribbed high-necked knit sweaters with zipped breast pockets, as well as knit cardigans with four pockets — another inventive take on Carhartt’s chore jackets.

Though the Carhartt Wipe’s line has no confirmed release date or pricing at this time, it will likely launch during the upcoming fall 2023 season. In the past, Carhartt has also collaborated on co-branded lines with Marni, New Balance and Suicoke.