Sarah Jessica Parker Layers Oversized Cardigan, Fishnets & Pumps for ‘And Just Like That’ With John Corbett 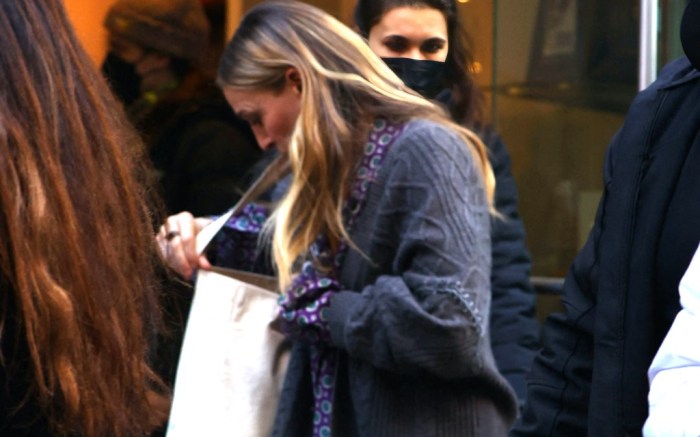 Sarah Jessica Parker was cozily outfitted to film “And Just Like That…” in New York City this week.

Parker’s ensemble was also accessorized with a large white leather tote bag and small purple crossbody bag, seen while her and Corbett filmed a scene shopping inside a kitchen appliances store.

When it came to footwear, the “Failure to Launch” actress wore a set of cap-toed pumps. Her style appeared to feature paneled satin uppers in light purple and white hues, complete with triangular toes. Thin white stiletto heels totaling at least 4 inches in height finished the set with a sleek height boost, giving her outfit a tonal pop of color.

Parker and Corbett’s outing is their latest as Carrie and Aidan — a coupling hailing from the original “Sex and the City” show and sequel film. The pair went viral while in character earlier this month, shot by Craig Blankenhorn while holding hands in the middle of a busy street — and confirming Corbett’s return to the “SATC” universe.