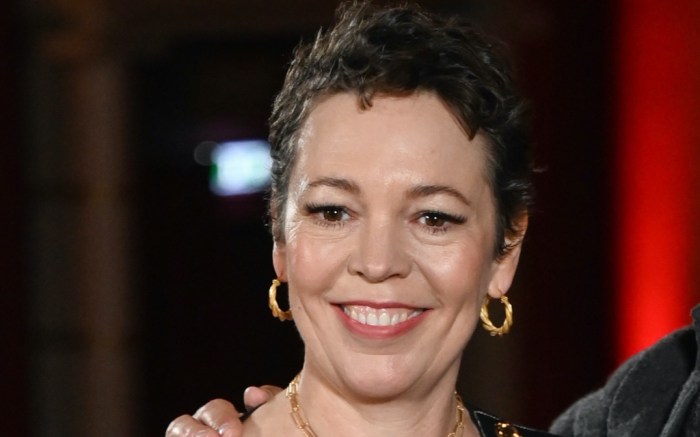 Olivia Colman was sharply outfitted to attend a screening of her latest film, “Empire of Light.” The ’80s-set romance drama, which Colman stars in alongside Micheal Ward, Colin Firth and Toby Jones, was previously released in December 2022.

At the occasion at Carlton Cinema, Westgate-on-Sea in Margate, England, the Oscar-winning actress arrived in a chic black midi dress. The long-sleeved piece featured white stitched detailing along its front and shoulders, which were also accented with swirling tortoiseshell buttons. Adding a contemporary elegance to Colman’s outfit was a squared gold watch, as well as braided gold hoop earrings and two paperclip-chain necklaces with respective pearl and hammered square charms.

Colman also briefly layered her dress with a black and white houndstooth and herringbone-printed paneled wool overcoat while outdoors.

When it came to footwear, the “Favorite” star’s outfit was smoothly finished with a set of versatile black boots. Her style included rounded toes and short block heels, likely totaling 2-3 inches in height. The pair added a clean base to Colman’s outfit, allowing the dress to take center stage and its smaller details to draw the eye.

When it comes to shoes, Colman’s styles are chic and elegant. On the red carpet, the “Fleabag” actress has regularly worn neutral and jewel-toned  pointed-toe pumps and mules, occasionally accented with embellishments including floral crystals and bejeweled buckles. Formal occasion have also seen her in similar lace-up booties and mules. All are in a variety of hues and textures, hailing from brands including Christian Louboutin, Malone Souliers and Manolo Blahnik.

PHOTOS: Discover how high heels have transformed through the years in the gallery.