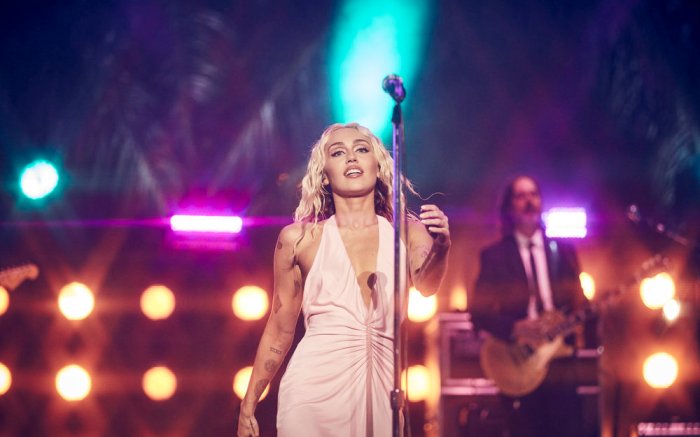 Miley Cyrus is returning with a new album “Endless Summer Vacation,” which she announced in bold style on Thursday morning. The musician’s new Los Angeles-inspired record will be preceded by the single “Flowers” on Jan. 13 and includes production from Kid Harpoon, Greg Kurstin, Mike WiLL Made-It and Tyler Johnson, according to Rolling Stone.

Cyrus shared the album’s announcement and March 10 launch date on Instagram, featuring an effortlessly sleek cover where she hung from a chained bar against a cloudless blue sky. Styled by Bradley Kenneth, the “See You Again” singer’s outfit was simply composed of a silky black Alaïa bodysuit with a halter neckline and an angular side cutout. Sunglasses and a bold red lip completed the viral moment, shot by Brianna Capozzi.

When it came to footwear, Cyrus strapped into a set of slick slingback pumps from Saint Laurent. Adding to her outfit’s retro cutout nature, the star’s ensemble was complete with a pointed-toe set of heels with black leather uppers. Stiletto heels finished the pair with a height-boosting base.

Cyrus’ now-viral announcement comes just days after she kicked off New Year’s with godmother Dolly Parton, Paris Hilton and Sia for her “Miley’s New Year’s Eve Party” special on NBC on Jan. 1. The occasion found Cyrus in an array of sleek vintage outfits by Bob Mackie, Versace, Gucci, Dior and Saint Laurent from 1991-2006, as well as a custom Gucci dress, all styled by Kenneth.

For footwear, Cyrus coordinates most of her pairs to her current musical aesthetic. Since the release of the rock album “Plastic Hearts,” the “7 Things” singer has donned a range of platform boots and pumps — often accented with crystals, studs, or metallic hues — from labels like Versace, Saint Laurent and Alexandre Vauthier. She’s also been seen in sleek sandals and mules by Amina Muaddi and Giuseppe Zanotti. The star has been a longtime fashion industry star since rising to fame in the early 2000s, even collaborating on a line of sneakers with Converse in 2017. Most recently, she’s starred as the face of Gucci’s newest fragrance, Gucci Flora Gorgeous Gardenia.

PHOTOS: Click through the gallery to see Cyrus’ style transformation over the years.