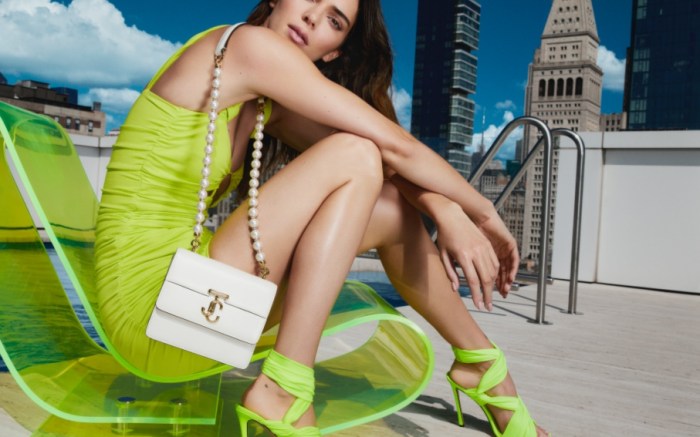 Kendall Jenner is starring as the face of Jimmy Choo’s latest campaign.

The model teamed up with the luxury brand for a second season to appear in the spring 2023 campaign as a continuation of the “Time to Dare” series.

Jenner is propped against the New York City skyline in the spring campaign, which was shot by Carlijn Jacobs. The new ads are inspired by superheroines and the transformative power of fashion. Sandro Choi led creative direction while Paul McLean was the video director.

Jenner poses in an array of looks in the advertisement. She wears a neon green ruched mini dress paired with matching strappy Neoma 110 sandals. Denim is also a focus, and Jenner wears a jean long sleeve bodysuit paired with Talura 100 pumps covered in the brand’s JC Monogram, plus the Avenue Quad handbag also adorned with the print.

The campaign ads were released today and are running globally.

Jenner’s impressive modeling career has put her at the face of several campaigns over the years, as well as many runways. Other than Jimmy Choo, she’s worked with Michael Kors, Boss, Fendi, Givenchy, Calvin Klein and La Perla.