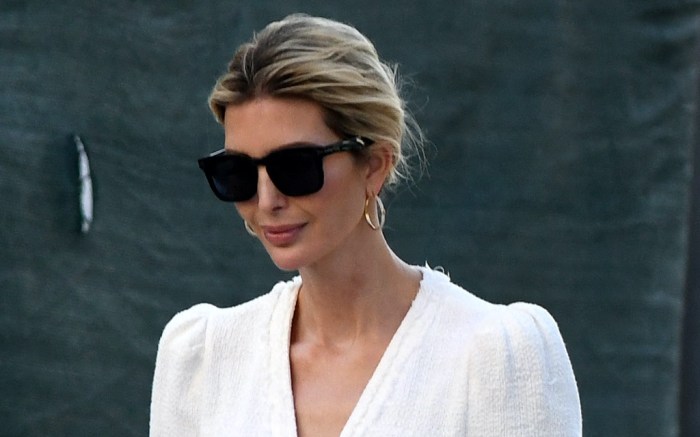 Ivanka Trump was sportily dressed for family time on the ocean this week.

On Monday, the former presidential advisor posed on a jet ski while in the ocean with her and Jared Kushner’s 9-year-old son, Joseph Kushner. For the occasion, Trump wore sunglasses and a yellow and blue-paneled life jacket, layered over a black swimsuit. Kushner was practically dressed for the occasion as well, wearing a white swim shirt and striped swim trunks.

When it came to footwear, Trump’s shoes could not be seen. However, she likely wore a pair of complementary rubber or perforated water shoes — or opted to go barefoot while on the water, which is also a popular choice for the activity.

Prior to their jet ski moment, Trump and Kushner had been seen on her social media together while celebrating Hanukkah. During the occasion, Trump wore a long-sleeved mock-neck dress covered in sparkling cream sequins. The knee-length piece was complete with a matching sheer flower accent on her right shoulder, as well as small drop earrings.

https://www.instagram.com/p/CmnWfwvu5LF/?utm_source=ig_web_copy_link
Trump’s shoe style typically veers into the versatile route, with a range of single-tone pointed-toe pumps from brands including Manolo Blahnik. Off-duty, she can also be seen in flats, thong and wedge sandals by Gianvito Rossi, Tkees and Aquazzura. Her casual shoes also include sneakers by APL, Mizuno and New Balance. After departing Washington, D.C., in January 2021, Trump and her family began residing in Miami. The former footwear, apparel and accessories designer left the nation’s capital after the end of her father President Donald Trump’s term in office.