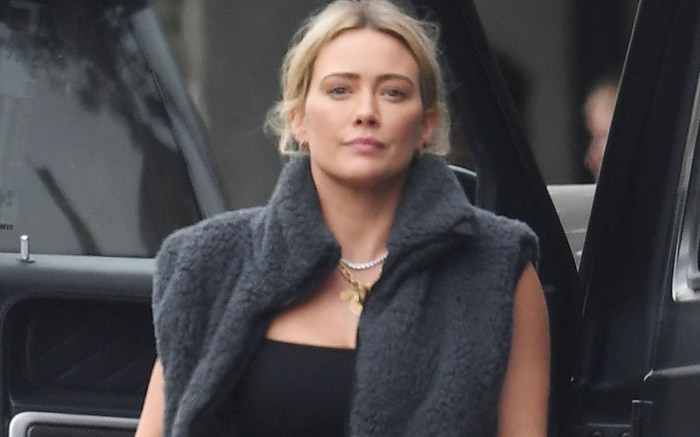 Hilary Duff took a chic approach to night-out dressing while taking in a performance of “Funny Girl.”

In a new Instagram post, the “Lizzie McGuire” star posed with star Lea Michele and a group of friends while out in New York City on Saturday night. For the occasion, Duff was sharply dressed in a light tan knit dress, featuring a turtleneck silhouette and allover ribbing. The contemporary piece was paired with layered gold necklaces, including Foundrae’s popular gold clip chain, as well as matching earrings. Duff further appeared to accessorize her outfit with a beige leather crossbody bag and caramel-hued coat while outdoors, as well.

“Lea, what a treat to see you in this role! You shine so bright … it was made for you!” Duff shared in her caption.

When it came to footwear, the actress slipped into a set of cream booties. Her ankle-high style included what appeared to be pointed-toe leather uppers, likely finished with block or stiletto heels totaling at least 3 inches in height. The style’s angular silhouette and hue smoothly complemented Duff’s neutral ensemble while remaining bold in their own right — much like similar pairs in new collections by Stuart Weitzman, Marc Fisher and Veronica Beard.

The “Cheaper by the Dozen” actress is no stranger to a bold fashion moment. In fact, in Dec. 2022 Duff made a sleek statement in a graphic T-shirt, printed miniskirt and lace-up combat ankle booties while in character as Sophie for season 2 of Hulu’s “How I Met Your Father.”