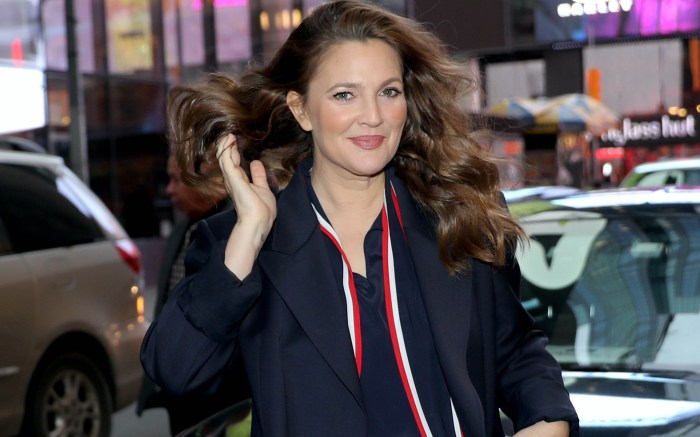 It’s M3gan’s world, and we’re just living in it — at least, according to Drew Barrymore.

On Instagram, Barrymore dressed as the hit horror film “Megan”‘s namesake robot doll, mimicking its viral dance moves to scare Ross Mathews. For the occasion, her costume featured a gray striped long-sleeved shirt worn beneath a puff-sleeved beige minidress. The “Blended” actress‘ ensemble was complete with a red and navy striped bow, as well as white tights and — for added dedication — blue contact lenses.

While on the show, Barrymore sat down with actress Allison Williams to discuss her leading role in “M3gan,” which has become one of the top films so far of 2023. You can watch their full interview on YouTube, below.

Barrymore’s “M3gan” moment follows her announcement of a collaboration with eco-friendly home cleaning brand Grove Collaborative earlier this year, which she posed for in a lemon-yellow blouse, gray trousers and platform heels on Instagram.

Barrymore’s shoe style ranges from sleek to bohemian. The “Miss You Already” actress often wears platform boots, pointed-toe pumps and platform sandals by Jimmy Choo, Gucci and Larroude, most frequently on her talk show “The Drew Barrymore Show.” Off-duty, she can also be seen in Converse sneakers, Dr. Martens boots and Crocs slides.

PHOTOS: Discover Barrymore’s street style over the years in the gallery.