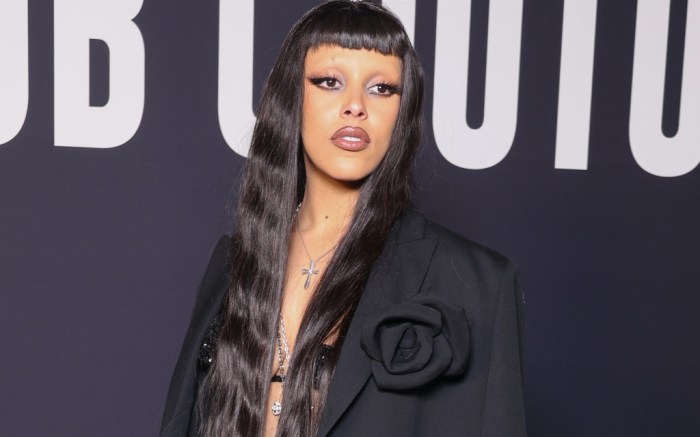 While attending the show in Paris today, the Grammy Award-winning musician dynamically arrived in a black bra and short shorts. The set, styled over sheer black Calzedonia tights by Brett Alan Nelson, was paired with a lapeled black cape-style coat featuring slit sleeves, double-breasted buttons and a massive rosette. Giving Doja Cat’s outfit a gothic edge were black gloves and a long brunette wig, as well as a diamond crucifix necklace.

When it came to footwear, the “Moo” singer finished her ensemble with a towering set of Valentino pumps. Her $1,190 Disco style featured glossy black patent uppers with buckled ankle straps, closed counters and squared toes. Giving the set dynamic base, however, were soaring 7-inch block heels and thick platform soles. The sky-high heels provided the musician with a streamlined, sturdy base at the show — while also instantly streamlining her ensemble.

The musician was one of the numerous star attendees in Valentino’s front row, where she sat alongside Anne Hathaway, Sam Smith, Law Roach and Kylie Minogue.