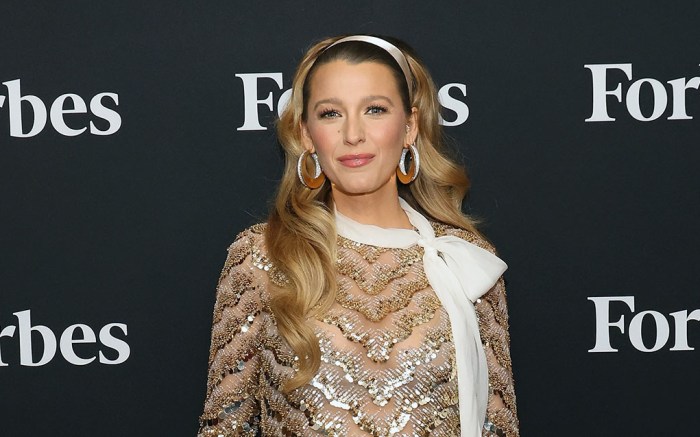 When it came to footwear, Lively gave her outfit a dynamic boost by re-wearing Christian Louboutin pumps deep from her own personal archive — and one of the designer’s most hotly-debated styles of the 2010s. The “Shallows” star’s Alex pumps — a round-toed style crafted from warm golden tan suede, which originally retailed at $4,995 — featured rounded toes shaped and textured to look like lion’s paws, complete with black sequined claws. Towering 4.8-inch stiletto heels coated in sparkling gold crystals, as well as Louboutin’s signature glossy red soles, dynamically finished the style.

The Alex pumps’ artistic silhouette gained instant notoriety upon their fall 2011 release. At the time, Lively notably wore the pair on and off-duty while filming “Gossip Girl.” The season also saw the style worn by Sarah Jessica Parker and Phillipe Blonde (one half of fashion designer duo The Blonds, alongside husband David) at the time.

Lively’s Alex moment follows her post on Instagram earlier this month while crafting a going-out ensemble, cleverly styled by layering a velvet Alaia skirt with a polka-dotted Reformation dress. Finishing her ensemble was a large pearl necklace, as well as a sparkling red crystal-buckles set of Manolo Blahnik’s satin Hangisi pumps.

The “A Simple Favor” actress has been a longtime fixture on the fashion scene, stemming from her glamorous style and close friendships with designers like Louboutin and the late Karl Lagerfeld. Lively previously served as the face of L’Oreal and Gucci’s Gucci Premiere perfume, as well as Chanel’s Mademoiselle handbag line, in the early 2010’s. She’s also a front row regular at Fashion Month, appearing at shows for brands like Michael Kors, Gucci and Dior, among others.

PHOTOS: Click through the gallery for more of Blake Lively’s hottest shoe moments over the years.