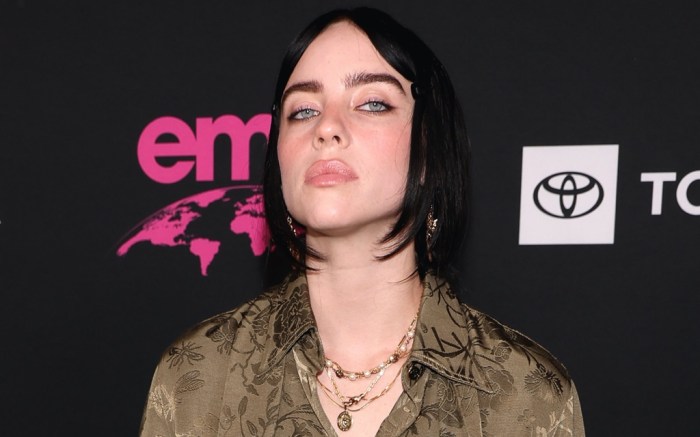 Vogue‘s first cover star of 2023 is none other than Billie Eilish, as well as a host of young climate activists.

Within the issue, as seen on Instagram, Eilish posed for the Mike Mills-shot editorial in a lightly raw-edged off-the-shoulder top and trousers covered in an allover cherub print, hailing from Balmain. Adding a hint of romance to the set were layered silver necklaces and small pearl-accented drop earrings by Pamela Love.

“I don’t want to be parading around like, Look at me! I’m making a difference. I just want to be making the difference and shutting the f-ck up about it,” Eilish shares with writer Jen Wang in her accompanying interview while discussing her passion for climate conservation. “I shouldn’t be making any products. I shouldn’t be selling anything. It’s just more sh-t to go into the landfill one day. I know that. But no one’s going to stop wearing clothes. No one’s going to stop making stuff. So I just do it in the best way I possibly can.”

Eilish also discusses her views on her rise to fame as a child, from her viral Spotify releases to winning numerous Grammy Awards.

“It’s wild,” Eilish says in the piece. “In my head, nobody knows who I am. Nobody knows what I look like. I was 13 when I put stuff out for the first time. I look back at who I was, when fewer eyes were on me. I grieve that. I strive to be that kid again.”

For footwear, Eilish usually opts for sneakers. In fact, she recently released a collaboration with Nike. During previous red carpet events, the star could be seen in platform sandals and pumps from brands like Gucci. However, her go-to styles are often sneakers hailing from Converse, Nike, Burberry and Balenciaga. The star occasionally wears tall boots that coordinate with her outfits as well, usually by Moon Boot, Dr. Martens and Swear London.