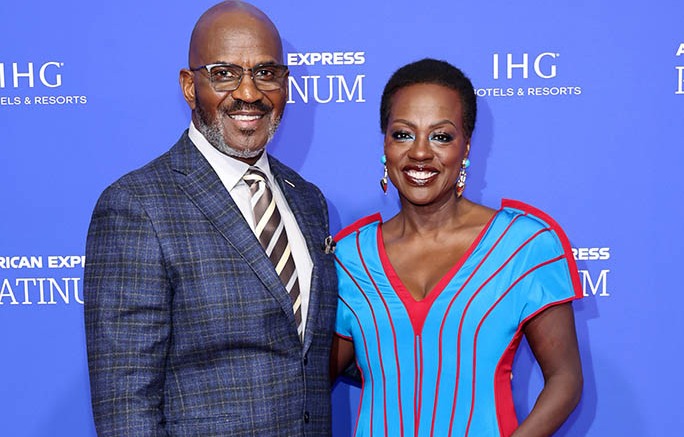 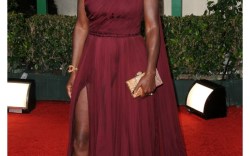 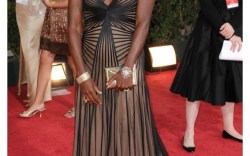 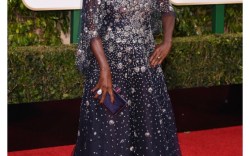 Viola Davis appeared in vibrant style at the 34th annual Palm Springs International Film Awards on Jan. 5. The award-winning actress was all smiles as she arrived on the red carpet alongside her husband, Julius Tennon. Davis received the Chairman Award at the ceremony for her work on “The Woman King.”

Davis took a colorful approach to red carpet dressing for the occasion. “The First Lady” star wore a short-sleeved blue and red dress by Tory Burch. The custom piece had a V-neckline and was outlined with a structured red trim on the shoulders and also included bold red lines in the front and paneling on the sides. To amp up her look, Davis accessorized with dangling gemstone statement earrings.

Completing the Tony Award winner’s look was a set of pointy metallic heels. The silhouette peaked out slightly underneath her dress and had a triangular pointed toe.

Davis’ husband Julius Tennon was sharply suited in a blue plaid blazer jacket with a white button-down shirt and dark gray trousers. He complemented his outfit with a striped tie and brown loafers.

Davis has captivated fashion lovers with a parade of red carpet looks over the years. She has an affinity for statement earrings, monochrome moments, bold prints and classic separates. Davis has easily become one to watch since working with stylist Elizabeth Stewart. On the red carpet, the actress often wears coordinating pointed-toe pumps from brands like Christian Louboutin, Jimmy Choo and Stuart Weitzman. Off-duty, she can also be spotted in thong sandals, flats and mesh sneakers — plus one of her go-to shoes, a pair of gold platform brogues by Stella McCartney.

The Palm Springs International Film Awards is organized by the Palm Springs International Film Society, a non-profit organization whose mission is to cultivate and promote the art and science of film through education and cross-cultural awareness. The 34th edition of the ceremony was also attended by Austin Butler, Michelle Yeoh and Cate Blanchett.