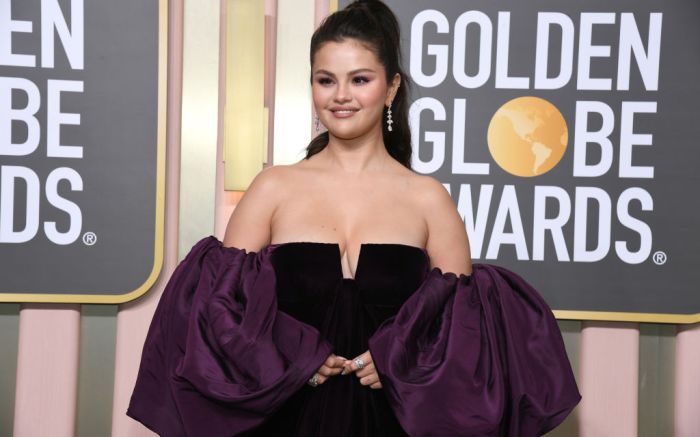 Selena Gomez made waves with her appearance on the red carpet at the 2023 Golden Globes tonight in Beverly Hills, Calif. The pop star boldly sported a lengthy Valentino dress and strappy heels.

Gomez is nominated for Best Performance by an Actress in a Television Series- Musical or Comedy for her roll in “Only Murders in the Building.”

The “Same Old Love” songstress gave audiences the cold shoulder, wearing an off-the-shoulder gown with large wine-colored balloon sleeves followed by a geometric red velvet skirt. The former Disney Channel star’s sleeves were attached to long strips of the same wine-colored fabric that gracefully trailed behind Gomez as she posed for pictures.

Gomez accompanied her glamorous look with coordinating black strappy Santoni platform sandals featuring geometric toes and a sturdy construction. The classic style was accompanied by a 4 to 5 inches heels. The footwear had thick straps that crossed over the top of her toes and around her ankles, securing them in place.

When it comes to Gomez’s shoe style, the star often wears staple pairs on and off the red carpet. The singer regularly dons metallic sandals and neutral pointed toe pumps for events by top brands, including Gianvito Rossi, Prada and Christian Louboutin. When off-duty, her outfits incorporate white sneakers that are usually from Puma, as well as Ugg slippers.