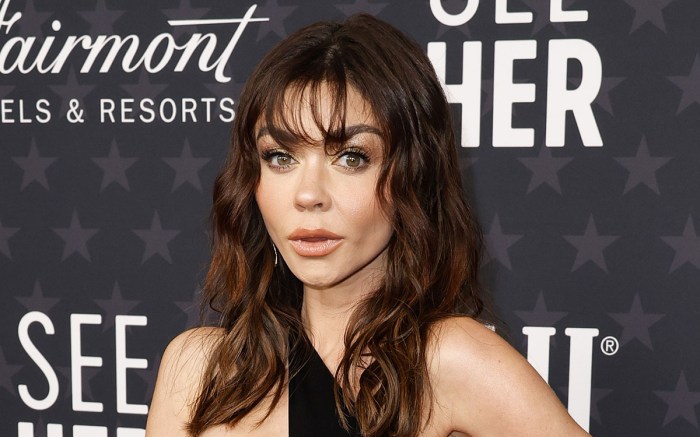 Sarah Hyland arrived at the 2023 Critics’ Choice Awards in a sleek black ensemble. The “Modern Family” actress is one of the many presenters of the night.

Hyland donned a little black dress designed by Stella McCartney to the event. The ensemble featured an asymmetrical cutout silhouette.

For accessories, Hyland dressed the gown up with a bold gold bracelet on her left wrist along with diamond rings on her fingers. Her hair was styled in wavy tresses that fell right below her shoulders while she debuted a new look with curtain bangs. As for glam, she kept it natural with rosy cheeks and nude lipstick.

Although her heels were hidden tonight, Hyland wore Stuart Weitzman heels to elevate her outfit.

When it comes to footwear, she often gravitates to designers like Le Silla, Christian Louboutin, Jeffrey Campbell, and Andrea Wazen to fulfill her footwear needs. Her off-duty looks sometimes include comfier styles by  Fila, Reebok and Nike.