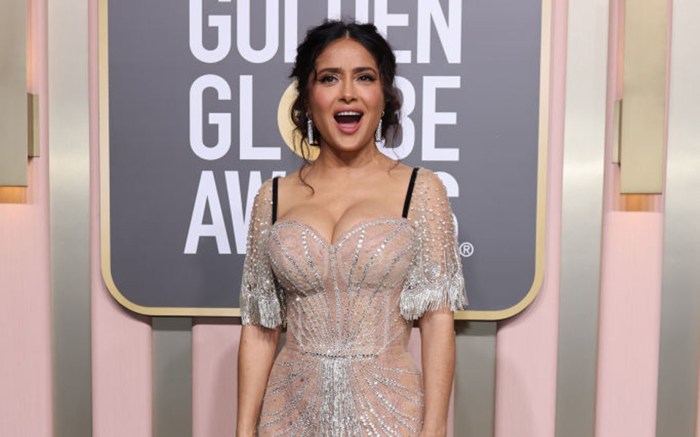 Salma Hayek hit the red carpet at the 80th Annual Golden Globes tonight in Beverly Hills, Calif. sporting a glimmering dress. The sparkling moment was reminiscent of the 1920s and the undeniable glamour of the times.

Hayek’s look was a short-sleeve style featuring a sweetheart neckline and swirling crystalized pattern set on a lacy nude backdrop. The fitted garment was trimmed with fringy crystals that caught the light laid all down the skirt and on the hem of her sleeves.

Hayek accompanied her bedazzled ensemble with a few statement-making silver rings and matching dangling metal earrings for good measure all from Maison Boucheron. As for her hair, the Mexican and American film producer styled her long dark brown locks in a messy updo, leaving curled forward-facing strands out in order to frame her face.

Although her footwear was not visible tonight, the Emmy Award winner is known for her penchant for sharp heels and trend-oriented, statement-making styles. The actress often dons platform pumps and strappy sandals from Gucci, as a muse to former creative director Alessandro Michele. For formal occasions, the Hayek often straps into matte neutral or shiny metallic pointed-toe pumps of sandal heels.