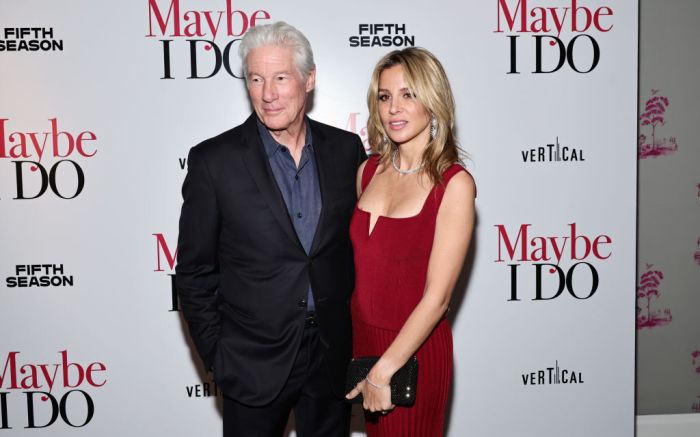 Richard Gere and his wife, Alejandra Silva, made a rare red carpet appearance for a special screen of “Maybe I Do,” hosted at the Crosby Street Hotel in New York City on Tuesday. The movie event was attended by many an A-list celebrity including Natasha Bedingfield, Susan Sarandon and Emma Roberts.

Silva donned a red jumpsuit that featured a fitted corset bodice and pleated pants. The publicist paired the romantic ensemble with a pair of dangling diamond earrings, a diamond choker and a black clutch.

Although her shoes weren’t visible in the picture, Silva elevated her outfit by slipping into a pair of platform sandals. The style peeked through the hem of her pants, revealing a sturdy construction in caramel color.

For the red carpet, Gere wore a classic single-breasted black suit with a denim-blue button-down shirt underneath and a pair of black suede loafers.

“Maybe I Do” is a romantic drama starring fellow Hollywood icons Diane Keaton, Susan Sarandon, WIlliam H. Macy, Emma Roberts and Luke Bracey. The movie follows the story of Roberts and Bracey’s characters, a young couple who is on the verge of deciding if they will break up or move on to marriage. Meanwhile, the young couples’ parents are engaging in an affair with one another’s spouses. “Maybe I Do” is a story of love and the difficulties of marriage tied up in a charmingly dramatic presentation and launches in theaters on Jan. 27.