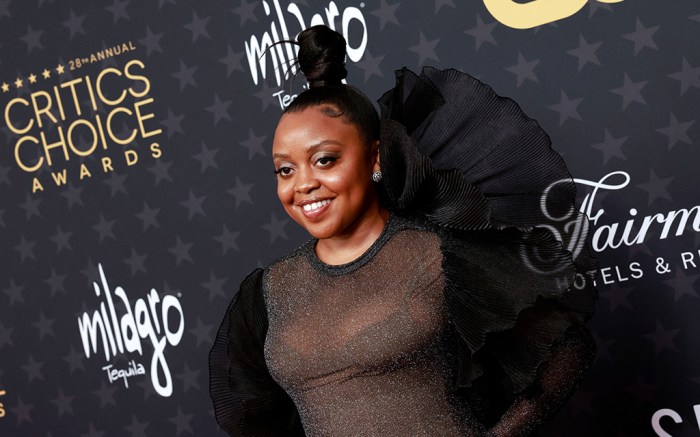 The “Abbott Elementary” creator, who is nominated in the Best Actress in a Comedy Series category, went for drama. Brunson wore a floor-length dress comprised of a sparkling black mesh and a black tulle element that lined the sides of the garment up towards the neckline. The voluminous gathered tulle was also utilized as an embellishment at the hem of the skirt, creating a mermaid-like silhouette.

Appropriate for formal events, floor-length gowns are often made of fabrics like satin, chiffon or organza to elevate the overall feel of the dress. Gowns that sweep the floor can have a variety of silhouettes and necklines, making the style essential for formal weddings, red carpet events and dressy occasions.

Finishing the outfit off strong, Brunson sported silver accessories that included a few statement-making rings and diamond-encrusted stud earrings. As for her hair, Brunson gathered her dark locks up into a tight top knot. Because of the copious amounts of tulle trim, Brunson’s footwear was not visible, although it’s likely she wore stiletto heels or platform pumps to elevate her look.

Brunson’s shoe styles often match her outfits, including metallic and colorful hues. On the red carpet, the writer can be seen in stiletto-heeled sandals, platforms and pointed-toe pumps from top brands including Giuseppe Zanotti, Loriblu, Stuart Weitzman and Le Silla.