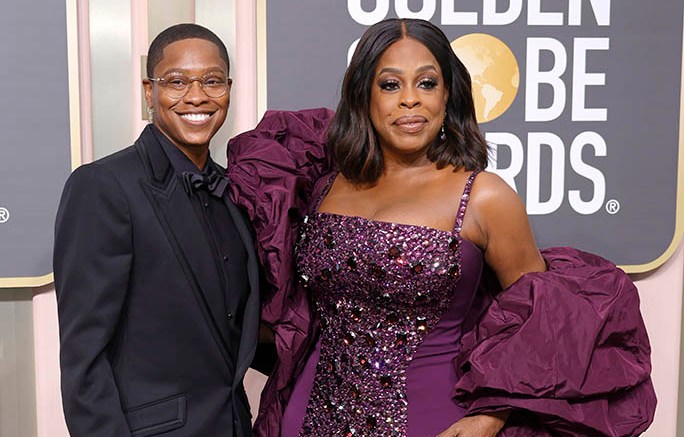 The stars are out in full force for the 80th annual Golden Globes held in Beverly Hills, Calif. tonight.

Niecy Nash and her wife Jessica Betts joined the star-studded ceremony in glamorous style. Nash is nominated for Best Supporting Actress in a Limited Series for her portrayal of Glenda Cleveland in Netflix’s, “Dahmer – Monster: The Jeffrey Dahmer Story.”

The comedian and actress looked stunning for the occasion, appearing on the red carpet in a sparkling burgundy dress by Dolce & Gabbana. The garment featured a square neckline, thin spaghetti straps and a crystal-embellished paneling at the center. To further elevate the moment, Nash added dainty drop earrings and kept a long, dramatic ruffled sash draped on her arms.

For glam, the “Claws” star went with a shimmery smokey eye and a glossy nude lip. She parted her hair in the middle and styled it in loose beach waves. Unfortunately, the length of Nash’s didn’t allow for a peak at her footwear choice, but she likely complemented her dress with platform heels, strappy sandals or sharp pointed-toe pumps.

Nash’s wife Jessica Betts was sharply suited in all-black attire. The singer’s ensemble consisted of a blazer jacket, button-down shirt and coordinating trousers. Betts tied the outfit together with a bow-tie and patent leather loafers.