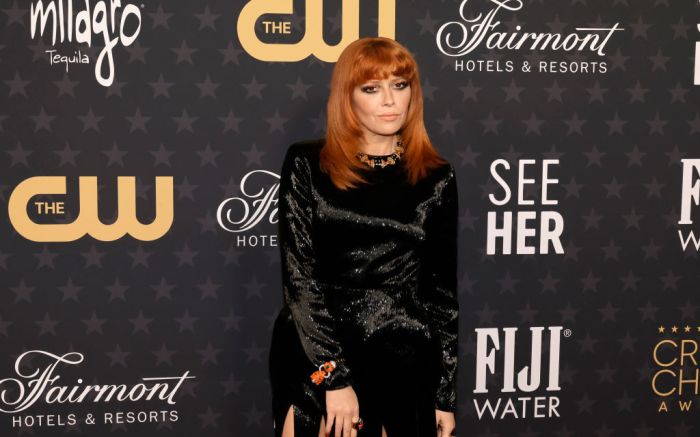 The “Orange is the New Black” star wore a gleaming black long-sleeved dress with quite a unique hemline. The skirt of the dress looked almost to be “shredded” from the top of the thigh to the end of Lyonne’s ankles.

The gothic-style dress was accessorized with several chunky statement pieces including several oversized rings and an orange, black and silver bracelet and necklace.

Lyonne’s famously-fiery locks were given a sleek blowout with front layers and bangs fairly framing Lyonne’s facial features. To play up the gothic effect of the dress, Lyonne went with a dramatic glam of long, coral pink nails, a very pale coral pink lip, heavily contoured and blushed orange cheeks, a dramatic layer of false lashes, and an orange-and-black smokey eye.

For footwear, Lyonne went with a pair of black platform pumps with a t-strap design. The style featured block heels elevating her look by at least 5 inches.