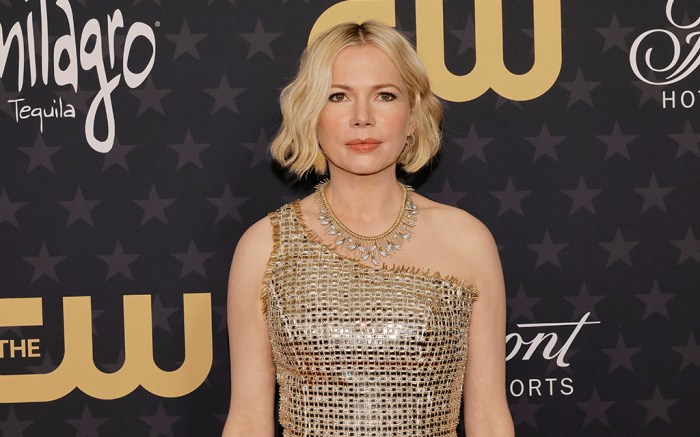 Michelle Williams attended the 2023 Critics’ Choice Awards at he Fairmont Century Plaza Hotel in Los Angeles tonight dressed in a glittering golden display. Williams is nominated for Best Actress for her role in the critically-acclaimed Steven Spielberg-directed film “The Fabelmans.”

Williams’ look was comprised of a floor-length gold gown featuring an asymmetrical neckline with a singular shoulder strap. The style was made of reflective gold fabric and trimmed with gold sequins, giving the garment the appearance of being woven or made of sturdy chainmail.

Williams’ dress was coupled with a Tiffany & Co. diamond-encrusted statement necklace and mini hoops. As for her hair, the “Brokeback Mountain” star kept her short blond bob parted down the middle, styled in loose waves.

Although her shoes weren’t visible thanks to the lengthy hem of her dress, Williams usually tends to gravitate towards height-boosting heels and pumps while on the red carpet. For formal events, the “Venom” actress can often be found wearing platforms and strappy sandal heels.