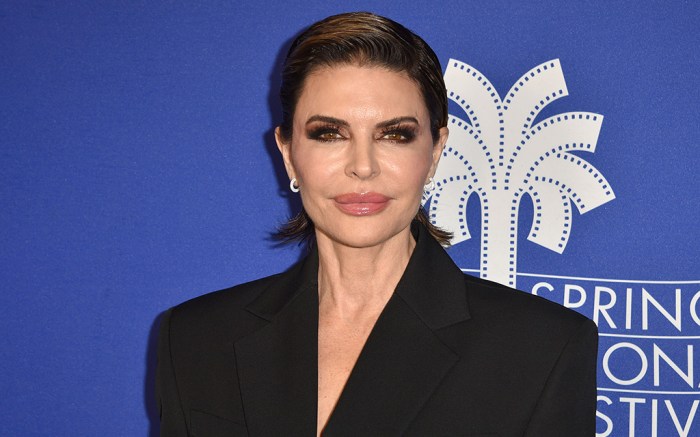 Lisa Rinna suited up for a night out at the 2023 Palm Springs International Film Festival world premiere of “80 For Brady” at Palm Springs High School in Palm Springs, Calif. yesterday.

The former “Real Housewives of Beverly Hills” star, who said this week she would not return to the show, looked sharp in a black Alexander Wang blazer dress with a structured, boxy fit and broad 80’s-esque shoulders. The double-breasted dress was a midi length and was belted and was followed by a pseudo pencil skirt with deep front-facing pockets. Rinna toted a crystalized Alexander Wang bunny bag and wore her short brown pixie cut slicked back for a formal appearance.

Women’s suits emerged in the early 1900s during the Suffragette Movement, but didn’t hit peak popularity until the 1980s as more women entered the workforce, becoming a go-to style for many.

When it came down to footwear, Rinna sported slouchy black boots lined with black faux-feathers. The footwear featured pointed toes and an appealing silky finish that transitioned into stiletto heels that ranged around 3 to 4 inches in height. The heel height certainly made the “Days of Our Lives” actress taller, while streamlining her silhouette, thanks to the angular arch and elongated toes.

When it comes to footwear, Rinna often opts for sleek and statement-making styles. The “Vanished” actress often wears pointed-toe pumps, boots and stiletto-heeled sandals for a range of occasions, hailing from top brands including Tom Ford, Versace and Saint Laurent. When off-duty, she can also be spotted in low and high-top sneakers by Gucci, Adidas and Y-3, as well as Nike slides.