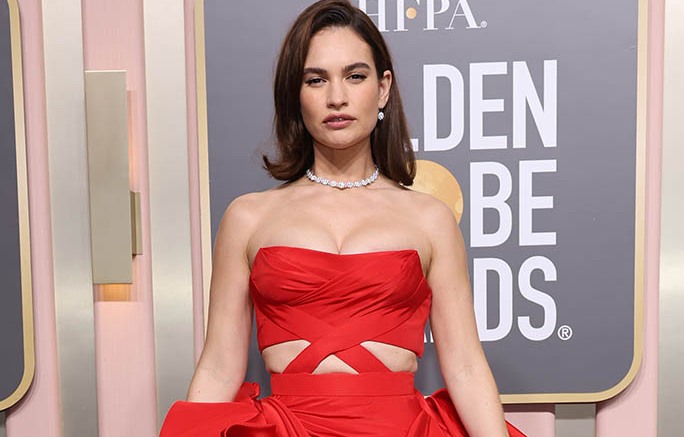 Lily James served old-Hollywood glamour with a modern twist at the 80th annual Golden Globe Awards tonight in Beverly Hills, Calif. James is nominated for Best Actress in a Limited Television Series and Motion Picture for her role as Palmela Anderson in Hulu’s “Pam and Tommy.”

James appeared at The Beverly Hilton in a vibrant red dress by Atelier Versace. The strapless gown featured a plunging square neckline, cutouts on the bodice and a fitted floor-length skirt. The eye-catching piece also included a dramatic ruffled sash that was attached at the waist.

To amp up the glam factor, James accessorized with dainty drop earrings and a diamond choker necklace. The Emmy-nominated actress parted her hair on the side and styled it straight.

When it came down to the shoes, the “Cinderella” star footwear was not visible. However, it is likely that the British entertainer tied her look together with strappy sandals, slingback pumps or platform heels from labels like Versace, Vivienne Westwood and Jimmy Choo.