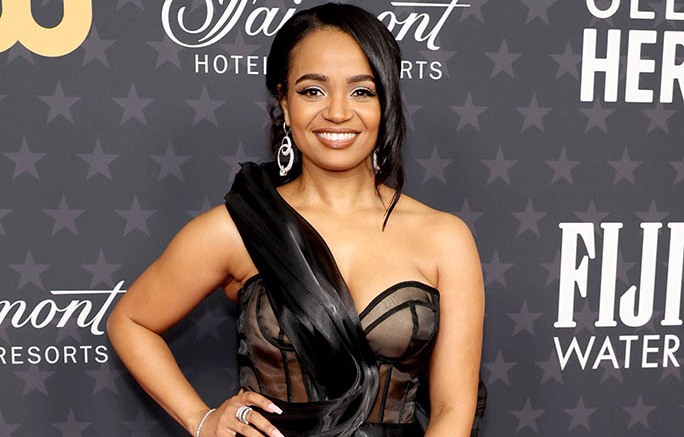 Kyla Pratt brought sleek glamour to the Critics’ Choice Awards 2023 in Los Angeles on Jan. 15. Held at the Fairmont Century Plaza Hotel, the ceremony celebrated the finest achievements in filmmaking and television.

Pratt appeared on the red carpet in a gorgeous black gown by Maison Met. The one-shoulder garment featured a plunging, sheer corset top with billowy accents near the waist, a front center slit and subtle train.

Taking things up a notch, “The Proud Family” actress accessorized with a slew of jewels by Dena Kemp and Luvente & Allurez including dangling statement earrings, diamond bracelets and a collection of midi rings.

For glam, Pratt went with soft shimmery eyeshadow and a glossy neutral pout. The “One on One” star parted her hair on the side and styled it in a low bun.

Completing the entertainer’s wardrobe was a set of platform sandals. The silhouette had crisscross straps across the toe, a chunky outsole and a strap around the ankle.

The 2023 Critics’ Choice Awards honors the achievements of filmmaking and television programming selected by the more than 600 members who complete the Critics Choice Association. This year, Chelsea Handler hosted the star-studded event held at the Fairmont Century Plaza Hotel in Los Angeles. Austin Butler, Cate Blanchett, Viola Davis, Ke Huy Quan, Jamie Lee Curtis, Tom Cruise and Janelle Monae were some of the nominees that attended the prestigious event.