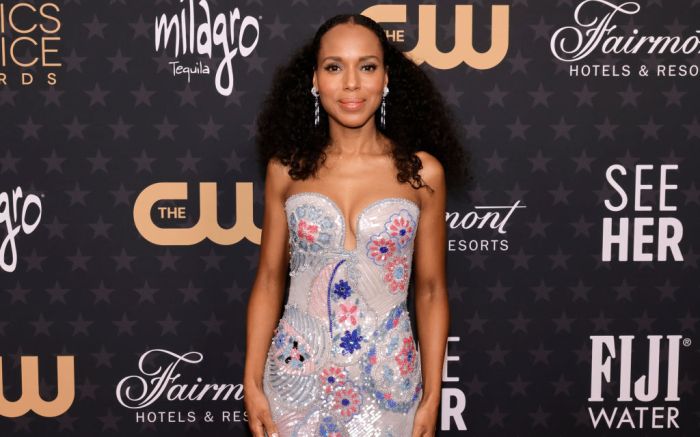 Kerry Washington made a glamorous arrival tonight on the red carpet at the 2023 Critics Choice Awards in Los Angeles. The actress is one of this year’s presenters at the ceremony.

For the red carpet, Washington wore a shining sequined dress with a paisley floral pattern. The dress featured an orbit neckline edged with a trim of silver sequins. The hem of the gown featured the same trim as on the neckline, and the flowers and leaves of the print were in an array of colors including pink, blue, silver and pink.

For accessories, Washington styled the dress with a semi-long, dangly pair of earrings with a spherical diamond ring. The “Scandal” actress kept her glam on the soft side with a subtle pink lip color, lightly blushed cheeks and a pale pink manicure. Her hair was parted in the middle to let flow out in a soft tumble of curls.

Although the shoes were hidden by the dress, we suspect that Washington donned a pair of high-heeled sandals from Santoni under the gown as she has been known to sport them for red carpet moments. Washington’s shoe closet hosts a bevy of high-end designers including Christian Louboutin, Jimmy Choo, and Amina Muaddi. When Washington isn’t wearing a pump or sandal, you can usually find the actress wearing edgier options like thigh-high leather boots or sneakers.