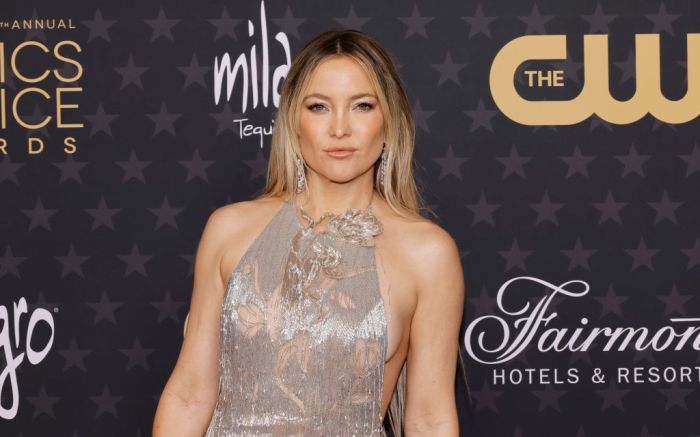 Kate Hudson brought shimmering style to the 2023 Critics’ Choice Awards tonight. She will present the SeeHer Award to her friend and fellow actress Janelle Monáe.

While hitting the red carpet at Fairmont Century Plaza in Los Angeles, Hudson posed in a sweeping platinum gown with a dramatic tulle hem. The dramatic piece featured thin allover fringe, layered across sheer paneling to create cutouts shaped like blossoming roses. A dynamic bejeweled flower added a sculpted finish to the neckline of the sleeveless piece, which was complemented with a sparkling diamond bracelet and swinging drop earrings by stylist Sophie Lopez.

When it came to footwear, Hudson’s outfit was finished with a pair of peep-toe heels. Her platform style included raised soles with angled curved toe straps, as well as thin ankle straps — all appearing to be crafted from cream satin. Though the set’s heels could not be seen, they likely included thin or thick heels totaling 4 to 5 inches in height.

Hudson has been on the publicity circuit since the release of Netflix’s “Glass Onion: A Knives Out Mystery,” for which she traveled the world serving striking looks on red carpets at international premieres. The “Almost Famous” alum has a strong connection with the fashion world and even created her own brand, Fabletics, to focus on athleisure style. For Hollywood events, Hudson is often seen wearing creations from Gucci, Saint Laurent and other designers