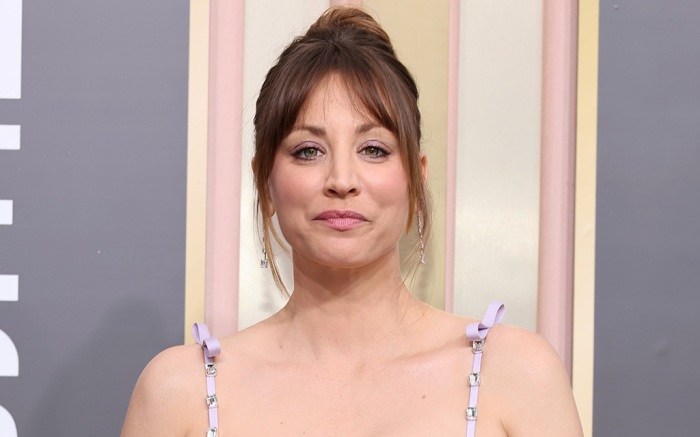 Kaley Cuoco highlighted her baby bump while on the red carpet at the 80th Annual Golden Globes in Beverly Hills, Calif. tonight alongside her boyfriend Tom Pelphrey. “The Flight Attendant” actress, who is expecting her first child, opted for elegance, sporting a lavender tulle gown for the star-studded event.

Cuoco’s look was comprised of a fitted bodice held up with two thin straps fastened with rows of crystals and topped off with decorative bows. The undercarriage of the bodice was also dotted with crystals. The skirt was floor-length and flowing, giving the pregnant star lots of leeway.

Although her shoes weren’t visible tonight, the “Authors Anonymous” star is a self-professed shoe lover with an expansive collection to match — her favorites being Chanel boots and flats, as well as any footwear by Miu Miu. The actress also owns a variety of designer heels from Manolo Blahnik, Nina Shoes, Saint Laurent and Isabel Marant.

PHOTOS: See all of the celebrity red carpet arrivals at the 2023 Golden Globes.