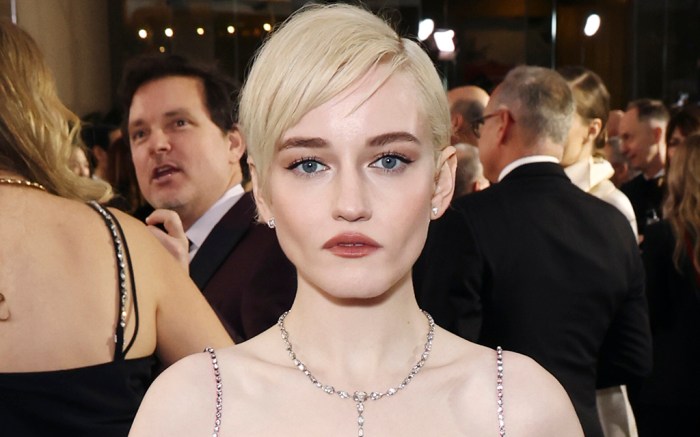 Julia Garner popped in pink at the 80th Annual Golden Globes in Beverly Hills, Calif. The actress had a special night, as she won the Best Supporting Actress – Television Series category for her work in “Ozark.”

Garner’s pink-centric ensemble was comprised of a floor-length strappy silhouette with a sweetheart neckline lined with crystals and made out of a voluminous tulle. What followed the bodice was an A-line skirt that was multi-layered, much like a cake, each layer featuring curly hems that created visual and textural interest. Almost every portion of Garner’s gown was embellished with some sort of crystalized detailing.

As for accessories, Garner packed an extra shiny punch with a statement-making De Beers diamond necklace and matching dazzling studs. The thespian’s short hair was parted to one side and styled around her features to frame her face.

Although her shoes weren’t really visible thanks to the lengthy hem of her dress, Garner sported what appeared to be metallic silver platform sandal heels. The platform shoe trend is one of the easiest styles to incorporate into any wardrobe. It is one of the most sought-after shoe styles and can be found in styles from brands like Gucci and Burberry.