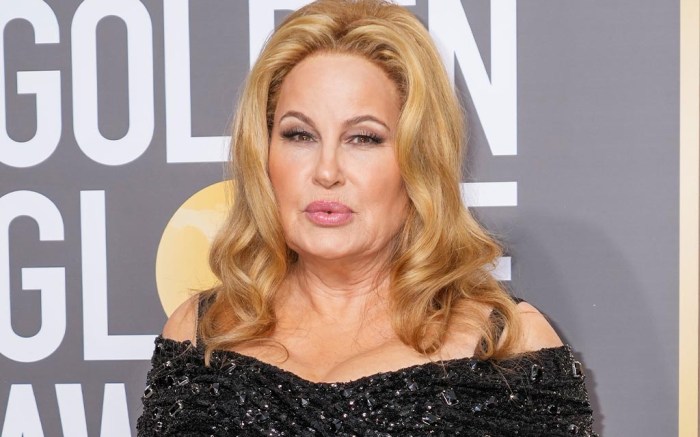 Jennifer Coolidge exuded classic glamour at the 2023 Golden Globes. The actress virally won the evening’s Best Supporting Actress in a Limited Series/Anthology or Motion Picture Made for Television award for her viral role as Tanya McQuoid in HBO’s “The White Lotus.”

While hitting the red carpet at The Beverly Hilton in Beverly Hills, the Emmy Award-winning star posed in a sparkling Dolce and Gabbana gown. Styled by Gaelle Paul, her ensemble featured a black off-the-shoulder column silhouette with long sleeves and cold-shoulder straps, all coated in shimmering sequins. Embroidered monochrome black crystals across the bodice added a bejeweled effect, as well.

When it came to footwear, Coolidge slipped into a sharp pair of Christian Louboutin pumps. Though the style could not be fully seen, her pointed-toe Pigalle Follies set featured black satin uppers with triangular toes and curved counters. Thin 4-inch stiletto heels completed the style with a classic, height boosting base.