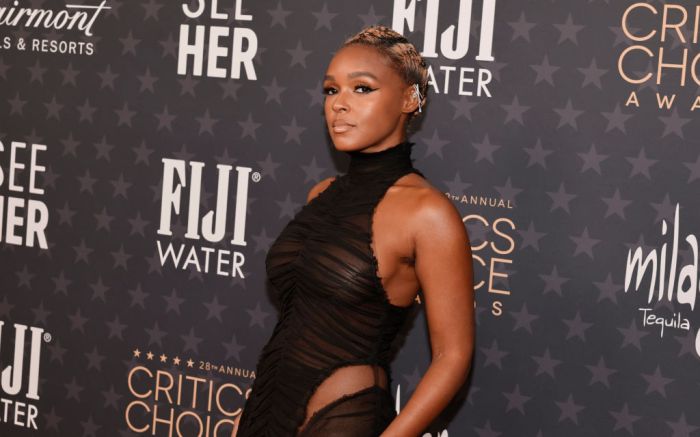 Janelle Monáe made a striking arrival at the 2023 Critics’ Choice Awards. Monáe will receive the SeeHer Award during the ceremony tonight. The award honors a woman who advocates for gender equality, portrays characters authentically and defies stereotypes in the entertainment industry. Kate Hudson, who co-starred with her on Netflix’s “Glass Onion: A Knives Out,” will present the award.

The “Hidden Figures” star donned a floor-length black sheer gown complete with intricate ruching throughout and precise cutouts at her hips. The gown was designed with a high neckline, creating a charming and appealing silhouette.

The “The Electric Lady” songbird selected open-toe heels for footwear to complete the look. The signature style hoisted the getup by at least 3 inches and flawlessly matched the rest of her look. Monáe’s footwear arsenal is full of eclectic styles from brands like Stuart Weitzman and Giuseppe Zanotti.

Many of Monáe’s looks are curated by her longtime stylist, Alexandra Mandelkorn, who also styles Jurnee Smollett, Christina Ricci, and Rachel Brosnahan. The actress is known for her avant-garde sense of style. During the promo tour of “A Knives Out,” she traveled the world showing off sculpted and textual gowns, as well as androgynous outfits, wearing Thom Browne, Christian Siriano, Iris Van Herpen and Elie Saab.