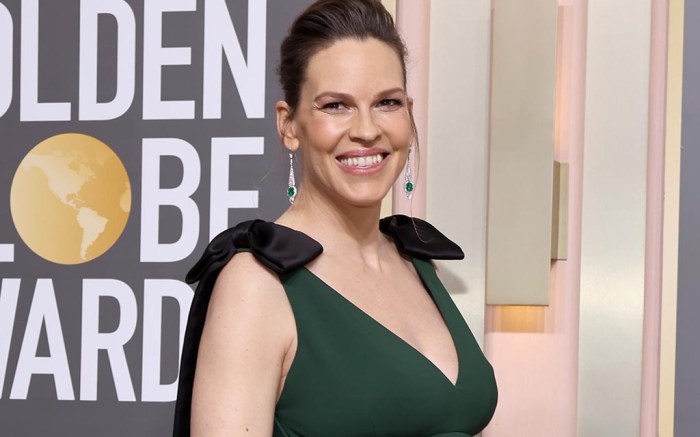 Hilary Swank elegantly dressed up her baby bump at the 2023 Golden Globes. The actress, who is expecting twins, is nominated this evening for Best Television Actress in a Drama Series for her role in “Alaska Daily.”

While hitting the red carpet at The Beverly Hilton in Beverly Hills, Calif., with husband Philip Schneider, Swank posed in a sweeping deep emerald green Prada gown. The Oscar-winning star‘s sleeveless silk crepe piece featured a floor-length skirt with a deep neckline and side slit.

Giving the gown a burst of elegant whimsy were two large black silk bows on each shoulder, trailing behind Swank to make a sharp statement. A sparkling diamond bracelet and diamond and emerald drop earrings from Tiffany & Co. glamorously completed her outfit.

When it came to footwear, Swank opted to slip on a set of pointed-toe pumps for the occasion. Her classic set appeared to include matte satin uppers with triangular toes. Though the style’s heels could not be seen, they likely featured a low-heeled silhouette with heels totaling 2 to 3 inches to allow the pregnant star easier movement during the event.