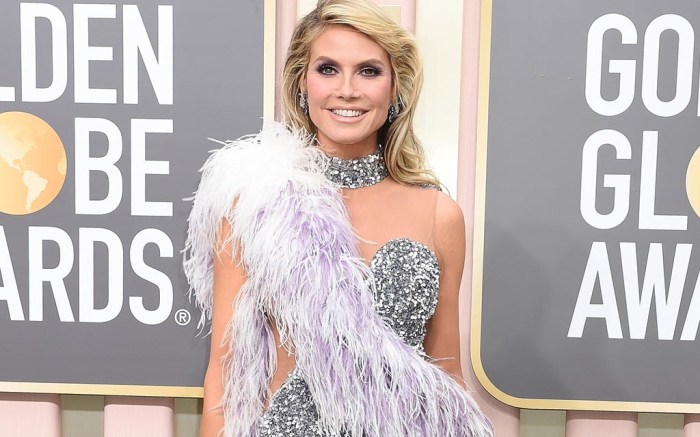 While hitting the red carpet at The Beverly Hilton in Beverly Hills with husband Tom Kaulitz, the “Making the Cut” host posed in a sparkly silver minidress by Kevin Germanier. Her sleek piece, hailing from Germanier’s spring 2023 collection, featured a high-necked construction, alternating between sheer fabric and curved panels coated in silver sequins. Adding a burst of drama to the piece were sprays of asymmetric ombre lavender and white feathers. Klum finished her outfit with several sparkling diamond rings and post earrings, as well as a white and silver embellished bar clutch.

Kaulitz was also dapperly dressed for the occasion in a classic black tuxedo and leather brogues.

When it came to footwear, Klum opted to strap into a set of metallic silver sandals. Her high-shine style featured thin soles with thin ankle and toe straps, creating a minimalist silhouette. Soaring stiletto heels totaling least 4 inches in height finished the pair with a height-boosting base, complementing her outfit’s silver hues while allowing her dress to take center stage. Due to the fit, her toes spilled over onto the carpet.