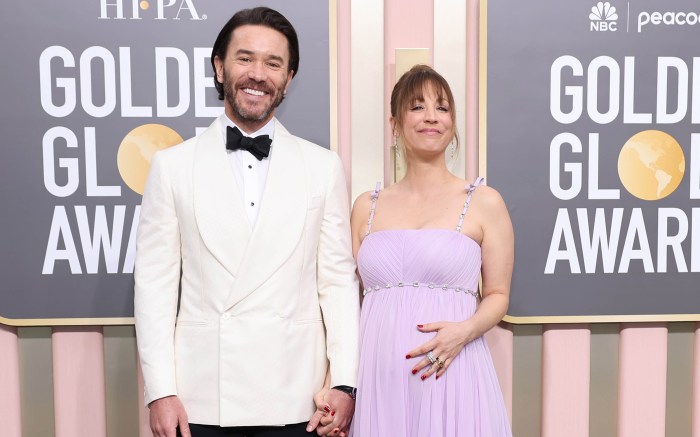 A longtime “moment” creator on the red carpet, pregnant celebrities stepping out for first or initially following their pregnancy announcements is the stuff of Hollywood lore. The Globes, held in Beverly Hills, Calif., on Tuesday night, were no exception. Nominees and attendees, most virally including Hilary Swank and Kaley Cuoco, flattered their bumps with elegantly draped gowns in hues ranging from pastels to deep jewel tones.

Of course, these couldn’t be complete without matching accessories; most stars’ included low-heeled sandals and pumps, glamorous diamond jewelry and their dashing partners.

Below, discover all of the glamorous baby bump fashion moments from the 2023 Golden Globes red carpet.

Hillary Swank, nominated for Best Television Actress in a Drama Series for her role in “Alaska Daily” and currently expecting twins, arrived on the red carpet with husband Philip Schneider and a Prada-draped baby bump. Swank’s maternity attire for the evening featured an emerald gown by Miuccia Prada, topped with black silk bows on each strap. Finishing her outfit were gleaming emerald and diamond Tiffany & Co. earrings and a diamond bracelet, as well as low-heeled black satin pumps.

Kaley Cuoco, nominated for her leading role in “The Flight Attendant” for Best Performance by an Actress in a Television Series – Musical or Comedy, arrived to the Globes with boyfriend Tom Pelphrey in a confectionary crystal-trimmed lavender gown — a custom Haute design by Vera Wang. Styled by Brad Goreski, the actress’ look was finished with gleaming diamond Rahaminov Diamonds rings and drop earrings, as well as a pair of nude-toned $83 crystal-trimmed PVC sandals from Charles & Keith.