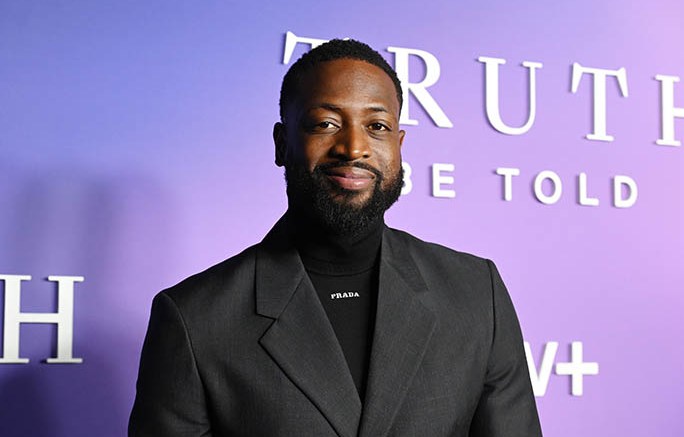 Dwyane Wade stepped out in sharp style alongside his wife Gabrielle Union for the season 3 premiere of Apple TV’s “Truth Be Told” in West Hollywood, Calif. on Jan. 19. The award-winning drama series will debut on Jan. 20 and stars Octavia Spencer, Kate Hudson and Mekhi Phifer.

While arriving at the Pacific Design Center, Wade appeared on the purple carpet in a full ensemble by Prada. The NBA star’s look consisted of a dark blazer jacket that had wide lapels and side slant pockets. He teamed the overcoat with matching cropped trousers that had front pleats and a sleek black turtleneck.

Completing the former Miami Heat basketball player’s look was a pair of shiny black boots that were also by Prada. The silhouette had a smooth finish with a round toe and a small square heel.

Union sparkled at the event, wearing a strapless three-toned beaded dress. The garment went from a lime green on top to a pink midsection and then black, which took up the majority of the gown. To amp up her look, the “Cheaper By the Dozen” actress accessorized with dangling diamond earrings and chunky midi rings.

Union styled her hair in a top knot bun and left out a few strands out on the side. Unfortunately, her footwear choice was not visible, but it is likely that she completed her look with thong or strappy sandals.

Union and Wade set the bar high when it comes to fashion. The pair is known for making fashion-forward statements and coordinating their ensembles.